New banknotes and coins in circulation as from next month 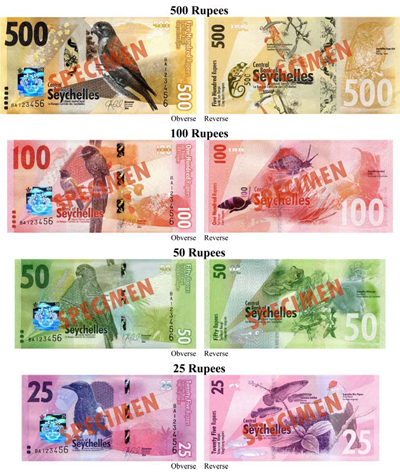 The Central Bank of Seychelles has announced that it will as from next month release a new family of banknotes and coins.

The release of the new notes and coins which will carry the themes “unique Seychelles biodiversity, the backbone of our economy” will commemorate 40 years of the country’s Independence.

The design of the new family of banknotes and coins therefore generally incorporates the beauty of the Seychelles and its endemic flora and fauna as their thematic icons.

Central Bank of Seychelles (CBS) governor Caroline Abel made the announcement during a press conference yesterday morning, adding that the project for the printing of the new notes and production of the new coins which started in 2012 is now in its final stage. She revealed that the new series of currency will comprise different sized paper banknotes of 500 rupees, 100 rupees, 50 rupees and 25 rupees.

New to the set of coins will be the 10 rupees bimetallic coin which is currently a banknote.

To ensure a smooth transition in their use, the CBS has ensured that 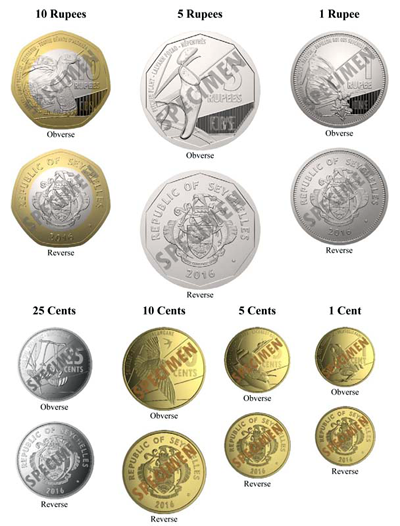 the new notes and coins retain certain design elements. The notes for example keep their general colour scheme. They at the same time carry new and enhanced features which offer better protection against counterfeit, cater for the needs of the visually impaired while celebrating our trilingual heritage.

Miss Abel has stressed on the need to enhance the robustness of the security features of the national currency to prevent printing of fake notes, as a core responsibility of the CBS and in alignment with the national and international expectations for good quality banknotes and coins.

“It is the responsibility of the Central Bank to ensure that everyone has access to liquidity in order to perform daily transactions. It is also its responsibility to prevent printing of counterfeit notes. In the past, some businesses have refused to accept payment in the form of 500 rupees notes by fear of forged currency. So we had to evaluate how to maximise security. Now when you hold a note in your hand you will know by its features that it is genuine. Sure it will be now more difficult to print counterfeit notes. As for the coins, they will surely last longer,” she ensured.

It is worth noting that some of the banknotes and coins currently in circulation were issued as far back as 1982. Others like the 500 rupees, 100 rupees, 50 rupees, 25 rupees and 10 rupees notes were issued in 1998. They will all remain legal tender and in circulation until they are eventually demonetised by the CBS which has announced that change will be done gradually through deposits made in commercial banks. Consequently, members of the public are being encouraged not to bring their old notes and coins to the Central Bank for change.

In order to ease the process, the CBS has printed worth of 5 million Seychelles Rupees in each of the new denominations. Distribution of the stock which it hopes will last for about five years will depend on demand from commercial banks.

The CBS wishes to ensure that the issue of the new notes and coins will have no effect on the country’s economy.