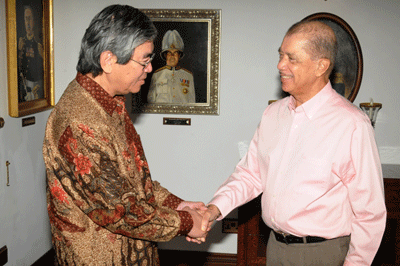 Talking to the press after saying his goodbye, Mr Soemarno said the two countries have achieved a lot in the area of cooperation but there is still room to do better.

“I have already done what I could do to enhance cooperation between the two countries. Officials from Seychelles have come to Jakarta and people from Jakarta have come here. But this is not enough, I want this to be more pronounced, further enhanced in the future. I hope my successor can achieve this,” said Mr Soemarno.

Regarding his achievements during his tenure as ambassador of Indonesia to Seychelles, Mr Soemarno cited as one example the increase in trade between the two countries.

He however noted that more can be achieved in future especially through the IORA and the Indian Ocean maritime security.

Ambassador Soemarno, who said he loves Seychelles very much, has served a term of three and a half years and was based in Nairobi, Kenya.