Phase 2 of the Drug and Alcohol Abuse Programme 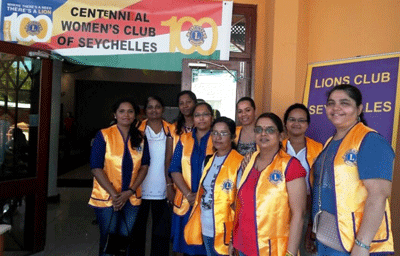 The Centennial Women’s Lions Club of Seychelles under the leadership of club president Dhana Sasikumar has conducted phase two of the clean-up campaign to clear all drug users from addiction in the country.

Fifty-four (54) addicts were screened between 8.30am and 2pm at the Les Mamelles community centre.

The drugs de-addiction screening covered many areas under one roof, including medical, dental, eye check-up.

This was initiated by Home Affairs Minister Charles Bastienne and supported by Dr Daniella Malulu and her team from the Ministry of Health. They were helped by the National Drugs Enforcement Agency (NDEA).

This drug de-addiction programme would be a nationwide and important contribution for the social wellness of the entire population. The Lions family joined together and made this programme a grand success.

Key members of the Lions Club who helped in the smooth flow of the day were its president Ramu Pillay and president of Melvin Jones Club, Dr Viveganadan.

Lions International is celebrating 100 years of existence in 210 countries in the world with 1.4 million volunteers in action and the motto chosen is ‘Where there is a need, there is a Lion’.

2016-08-31
Georges
Previous: Education for sustainable development
Next: Interview Parti Lepep leader President Michel: ‘We are proposing a new team that will continue to ensure that government delivers’