Police to boost up patrols with new vehicles 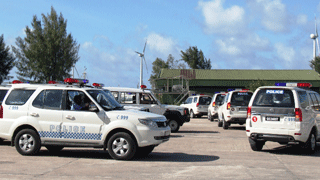 Patrols by the police are expected to get a big boost with the arrival of a new batch of 12 jeeps.

Built in India at the TATA Motors Limited, the 12 Safari Storme jeeps have cost the government R8 million, inclusive of levies and duties.

The jeeps, which arrived in the country on July 4, are equipped with state-of-the-art technology in communication where for example a police driver no longer requires to pick up the phone while driving as he can now speak freely with the wireless sound system controlled at the steering wheel.

The white jeeps are clearly marked with police labels and emergency lights on their roofs.

In a symbolic gesture yesterday afternoon at the premises of the former Seychelles Coast Guard base on Bois de Rose Avenue, Assistant Commissioner Reginald Elizabeth handed over the keys to designated personnel responsible for the handling of each vehicle.

Present at the ceremony were the Minister for Home Affairs Charles Bastienne, Commissioner of Police Ernest Quatre, Assistant Commissioner Godfra Hermitte, other police personnel and representatives of the Ministry of Home Affairs.

Minister Bastienne said the arrival of the vehicles “shows the government’s commitment towards the police force in line with the availability of funds, by giving them all the necessary resources so as to deliver to the expectation of the government and the public”.

Minister Bastienne added that another batch of vehicles will arrive by the end of the year and there should be no excuse by the police on what is expected from them.

He also urged the vehicles users to take good care of them and to treat those vehicles as if they were their own transport.

He mentioned that since taking office a lot of continued improvement has happened in the police force especially with regard to tackling crime which has seen a significant drop during the past five months.

For his part Commissioner Quatre said that responding to complaints of police cars being not well maintained, the police will have strict regulations with regard to officers using the vehicles as the police want to keep their transport in good and high standard for effective service in the community.

“Police officers will be accountable for any scratch or damage to the vehicle while in their care. It will have to be explained. Police officers must also follow road rules and regulations when driving on the road. It has to start with us. To add to that we will in the future have our own maintenance workshop for our vehicles,” he added.

Commissioner Quatre also said with the arrival of another fleet of police vehicles by the end of the year it will ease some budgetary constraints as the police will slowly phase out out the use of hired vehicles.

2015-07-10
Georges
Previous: People urged to be part of their district’s progress
Next: German nationals unharmed as chartered catamaran capsizes