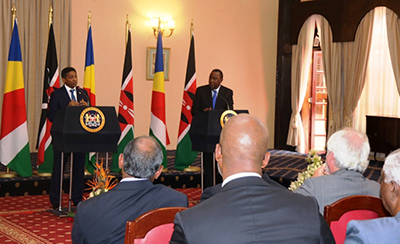 Areas of interest between Seychelles and Kenya, including maritime security, were discussed during the bilateral meeting and both Presidents Danny Faure of Seychelles and Uhuru Kenyatta of Kenya have impressed on the need to enhance cooperation.

Cooperation between the two countries may be enhanced through other initiatives such as sharing of intelligence and capacity building measures, President Kenyatta told a press conference just after the bilateral talks yesterday morning at the State House, Nairobi. Kenya Deputy President William Ruto also took part in the meeting.

Speaking during a press conference, President Faure said that by entering a wide-reaching agreement Seychelles and Kenya will expand their ties in trade and security.

It was discussed in the broad-based agreement that Kenya will export more human capital and agricultural products to Seychelles.

President Faure, who has described this visit as a historic state visit because Kenya is the first country that he has visited since he became head of state six months ago, said “it makes more economic sense for Seychelles to import beef and poultry from Kenya instead of countries like Brazil”.

On its part, Seychelles will support Kenya in developing its maritime sector especially the fishing industry, which Kenya President Uhuru Kenyatta said his country has paid little attention to since independence.

President Kenyatta and President Faure also announced that Seychelles will support Kenya to make the port of Mombasa develop the capacity to act as a fish trans-shipment port.

The two countries have also agreed to cooperate in tourism development by partnering the agencies and ministries managing the sectors in the respective countries.

President Faure said his visit to Kenya, the first state visit since he became president, “has a true meaning”.

He said Seychelles is ready to work with Kenya to develop its Blue economy and to improve the security of its exclusive economic zone.

“We can help you develop your fisheries sector and your defence sector specifically coast guard,” said President Faure.

He hailed President Kenyatta for his leadership role on the continent and for “putting in place development agenda to transform Kenya and to benefit its people and staying focused despite the challenges”.

“What your president is doing here he has been putting in place a development agenda to meet the new challenges of the Kenyan people. It has not been easy for him but what is important is that he has remained focused on developing your country so that the people can reap the benefits of his new pragmatic way of dealing with the problems of Kenya,” said President Faure who also praised President Kenyatta for his leadership role in the African Union and his efforts to help Somalia regain normalcy.

President Faure added that he has reached a deal with President Kenyatta that Kenya and Seychelles will put a framework for a two-centre tourism destination where the two countries will work jointly to promote their tourism products.

“The renewed partnership between Kenya and Seychelles is informed by the fact that it is a new age and today Africa is different from the Africa of the 1950s… It is an era where we need more transformational leadership that can translate the freedom of our people into shared prosperity,” added President Faure.

The Seychellois head of state also said that some 120 years ago Seychellois came to Kenya to help build the Kenya-Uganda railway.

On his part, President Kenyatta said Kenya and Seychelles each have tourism products they are famous for and it will make economic sense if they partnered to promote each other.

“Kenya is known for its safari tourism while Seychelles is known for its beach destinations,” said President Kenyatta who also revealed that Seychelles wants to employ Kenyan teachers to join other Kenyans working in other sectors in the island country.

To further enhance the close cooperation between the two nations, Kenya Airways will also increase its flights to Seychelles and President Kenyatta noted that “it is both our ambitions and intention to ensure that we do everything that we can to deepen regional trade investment and to grow our regional economies by working together”.

He noted that there is a sizeable Kenyan diaspora in Seychelles and the Seychellois have long ties with Kenya.

“What we are doing now is to improve government to government ties,” said President Kenyatta.

He took the opportunity to thank Seychelles for the important role it has played as a strategic security partner in dealing with piracy and drug trafficking.