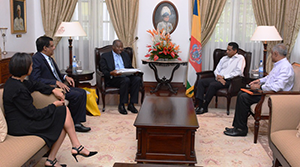 Former Chief Justice Frederick Egonda Ntende, president of the tribunal of inquiry set up to investigate into the professional conduct of Judge Durai Karunakaran, presented a report of its recommendations to President Danny Faure at State House yesterday afternoon.

The other members of the tribunal appointed by the Constitutional Appointment Authority (CAA) in April this year are Justice Mohan Niranjit Burhan and Justice Samia Govinden. They were also present at State House yesterday.

Speaking briefly to the press after the handover, Mr Ntende said it is up to President Faure to divulge the content of the report.

“Our responsibility as the tribunal was to make recommendations to the President and it is up to him to disclose the content of the report. He should be given the opportunity to read and digest the content and I am confident that after that the report will be made public,” Mr Ntende said.

He added that today the report will also be handed over to the CAA.

The decision to suspend judge Karunakaran was taken in October 2016 and according to Chief Justice Mathilda Twomey, it was as a result of a decision made by the CAA to refer him to a tribunal of inquiry to investigate into his professional conduct.

In a statement released on Monday October 10, 2016, State House said former President James Michel, under article 134 (4) of the Constitution, suspended judge Karunakaran from performing his functions until the conclusion of the inquiry. 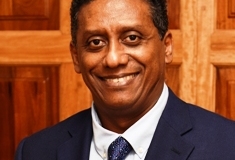