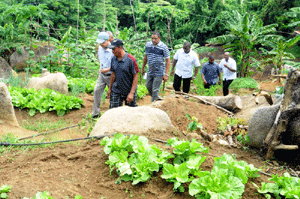 Young Seychellois are once again being urged to make the most of the opportunities being given to them to start a business and help in the growth of the country’s economy.
Investment, Entrepreneurship Development and Business Innovation Minister Michael Benstrong said this yesterday afternoon after accompanying President James Michel on his visits to businesses in the Anse Boileau and Anse Royale districts.

President Michel’s first stop was at Venessa Larue’s hairdressing salon at Cap Ste Marie, Anse Boileau.
Ms Larue started the business in her own bedsitter five years ago. She said her business is doing very good as some clients travel all the way from Victoria to have their hair done at her place. The mother of two added that the time has come for her to expand her business, but she is still waiting for the drawing from the architect.

“I have applied for a loan with Barclays Bank but it’s not enough to extend the salon as I have to use part of the money to purchase products from two suppliers,” Ms Larue told the President.
She was advised by Minister Benstrong to bring her drawing to either the Development Bank of Seychelles or the Seychelles Business Financing Agency to look for a more affordable loan.

At Louis Loizeau’s craft workshop at his residence at Anse Boileau, President Michel and his delegation learned how he goes about doing his craft and woodwork.

“I always use the creole theme in all my creations. And every piece of work is authentic as you will never find one that resembles the other,” said Mr Loizeau who does wood engraving and also works a lot with coconut shell.

Preparing the galet (cassava bread) is not too difficult and Leonie Barra along with son Pearson Florentine showed their visitors how it is done at their farm at Montagne Posée.
Mrs Barra, who grows most of the cassava she needs but still has to buy from other suppliers to meet the demand, produces between 300 and 400 packets of galet per day.

From Montagne Posée, the presidential delegation drove to Hermitage at Anse Boileau to meet Kenny Jouanneau on his farm.

“I started growing root crops and vegetables on this piece of land 17 years ago. I understand other farmers refused to work on this land as it was like a forest. But I took up the challenge and I’m happy with the results,” said Mr Jouanneau who resides at Anse Louis.

Mr Jouanneau told President Michel that his three main concerns are the lack of water in this hilly area, the state of the road leading to his farm and his lease agreement on which there is no determined length period.

When many farmers have said they are no longer into poultry production, Tony Tirant has said his poultry and egg farm at upper Anse Louis is doing well with 8,000 chickens and added that he was about to collect another batch of 2,500 chicks that had just arrived from Mauritius.

“My business is growing fast and I have to keep up with the level of development in the country and the growing demand for eggs. We supply the Seychelles Trading Company 200 trays of eggs per month and they have increased it to 500. We have the capacity and the know-how to meet the demand,” said Mr Tirant who employs five workers.

Mr Tirant, who also imports his poultry feed from Mauritius, noted that it is cheaper for him to buy chicks from Mauritius than locally.

“I pay R13 for one chick in Mauritius, but here it costs R25. The mortality rate is also very high among local chicks and because there is no special laboratory here it is impossible to know the cause of death of the chicks,” said Mr Tirant.

A determined Mr Tirant, who said he builds his own poultry housing, urged President Michel to make the process of clearing of containers easier as most of the time it takes him more than a week to clear the containers which contain the feeds and during this time he doesn’t have enough to feed his chicken.

From Anse Boileau, the presidential delegation drove to Anse Royale and its first stop there was at Conrad Louis-Marie’s residence where he produces chips from banana and cassava.

Mr Louis-Marie said he worked for Mr Mondon, another small entrepreneur the President visited earlier this year, for more than 20 years before he decided to start his own business.

He said together with his cousin they transform 100kg of banana into chips every day. Mr Louis-Marie also thanked his wife for helping them out whenever she can.
The President also visited Rowny Vidot’s spices factory at Anse Royale.

When he visited prominent artist Danilo Albert who suffers from a rare disease that limits his movement, President Michel was impressed with the work he has been doing in preparation for a future exhibition.

Mr Albert also does finishing work by applying colour and drawings on different objects for his clients.

His companion, Merina Accouche who is an instructor at the School of Visual Arts, also took the opportunity to show President Michel the work she has designed over the years and her future projects.

Also at Les Cannelles, the President met Veronique Morel at her place named Le Cannellier which also has two rooms which she rents out. She said she gets a lot of clients from Reunion and Russia.
Mrs Morel, who used to work at the Seychelles Land Transport Agency before deciding to start her own business seven years ago, said she will soon be upgrading the rooms as competition is becoming stiffer.

She also has a flower arrangement business.
Still in Les Cannelles, Mr Michel met former ambassador Marc Marengo and he showed the delegation the large variety of flowers in his Kot Man-Ya exotic flower garden before serving them some fresh passion fruit juice.

Mr Marengo, who has had a long career as a diplomat and enjoys being in harmony with nature, also showed the president souvenirs of his 14 years spent in New York. On the many photos on the wall of a traditional house, he can be seen with ex-Seychelles President France Albert Rene when he went to the United States of America to take delivery of the first Air Seychelles plane,  as well as former US Presidents Ronald Reagan, George H. W. Bush (Bush the Elder) and Bill Clinton. 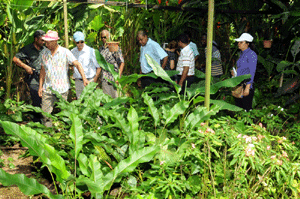 At Jacques Matombé’s Farm at Anse Royale, the President got himself apprised of the new shade nets – a new technology from Israel.

With 46 farm workers, among them 18 Seychellois, Mr Matombé said the shade nets are very good as they control the amount of sunlight and rain water that reach the plants and also it is very difficult for the plants to be attacked by pests.

Mr Matombé noted that this year is the 20th year he has been involved in farming on the five-hectare area in Anse Royale.
His main concerns are the fees of gainful occupation permit (GOP) per person and this makes it a big sum for him to pay as he has 28 foreigners, with young Seychellois not showing an interest in taking farming seriously.

“I believe students should be sent on attachment to established farms where they can learn and get to enjoy farming,” said Mr Matombé.
Following his visit, the President said he was impressed with the entrepreneurial spirit of the Seychellois people in both districts and their desire to grow their businesses. 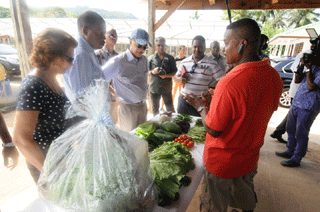 He also noted the constraints that some of these businesses are facing and that a lot of emphasis should be put on easing permissions to do business, lease agreements, access to water, swift access to cargos at Customs, among other issues.

“This visit has enabled me to see progress made in entrepreneurial activities and it was an opportune time for some of these business owners to share their concerns and difficulties that have to be addressed. I am pleased to see the spirit of innovation, and their determination to expand. Nevertheless, I encourage more young people to start a small business, be innovative, and to find ways to improve the traditional ways of producing local products,” said the President.

Speaking to the local media, Minister Benstrong also urged young people to come forward and play a part in developing the country.
“There is a demand out there for craft, farm produce, etc. So we need young people to come forward. They should make the most of the different schemes available and become more serious. At the same time they should also be innovative in their approach,” said Minister Benstrong.

The accompanying photos of the President’s visits to Anse Boileau and Anse Royale were taken by Louis Toussaint.