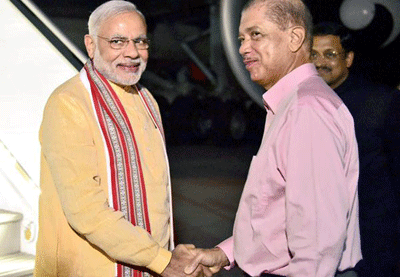 President James Michel has been instrumental in building up the relationship between Seychelles and India over the years. In this spirit, he will be undertaking another state visit to India next week at the invitation of the Prime Minister of India, Narendra Modi.

This will be President Michel’s fifth visit to India as head of state. He paid two state visits in 2005 and 2010. He again visited New Delhi in February 2011 and in February 2012 to take part in the Delhi sustainable Development Summit.

It is to be noted that this visit comes barely five months after the landmark visit of Prime Minister Modi to Seychelles, in March 2015. This is an illustration of the unique and special relationship which the two countries share based on their strong historical and cultural affinities. Strong family ties and kinship bind the Seychellois and Indian people.

The links between India and Seychelles cover collaboration and cooperation in diverse political, defence, economic, scientific, social, intellectual and cultural fields. The two countries stand linked through a rich package of agreements in various sectors. More agreements paving the way for greater success in the two countries’ partnership are expected to be signed during the visit.

Cooperation in economic and commercial sectors is also expected to be further strengthened. Both countries recognise the need to bring their economies closer to drive more growth, to create more opportunities for entrepreneurs of both nations and wealth for their respective peoples.

It will be recalled that President Michel in his National Day address this year placed the empowerment of entrepreneurs at the heart of his economic agenda.

During his visit, President Michel will hold bilateral talks with Prime Minister Modi and the President of India, Pranab Mukherjee, and other eminent dignitaries.

He will also have the opportunity to meet a large cross section of the Indian society, including prominent businessmen, investors, industrialists and academia.

He will share his reflection on maritime security and the Blue economy with members of the Indian Council of World Affairs (ICWA). ICWA is India’s unique prestigious and oldest think tank in the field of foreign policy. It is devoted to the study, research, debate, crafting of policy options and dissemination of knowledge in regard to India’s role in international affairs.

The visit will undoubtedly constitute another major milestone to reinforce the relationship between the two countries and to further advance the shared regional and global interests, including security, Blue economy, climate change, post-2015 development agenda and reforms of the United Nations Security Council.

President Michel will be accompanied by the Minister for Foreign Affairs and Transport Joel Morgan; the Minister for Finance, Trade, and the Blue Economy Jean-Paul Adam; the resident high commissioner of Seychelles in India Waven William; high-ranking officials in the President’s Office and a delegation from the private sector.