Psychology up close and personal 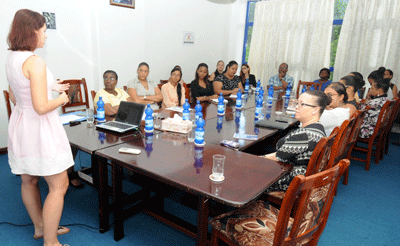 A group of psychologists are raising awareness about psychology as a field of study and as a profession during National Psychology Week.

This was through a seminar held on Monday as part of the activities being held  to mark the National Psychology Week which is being celebrated until November 15, 2015 under the theme ‘Psychology: Up close and personal’.

The seminar was held at the Agency for National Human Resource Development (ANHRD) in the presence of practicing psychologists, provisional psychologists, Seychelles National Youth Council (SNYC) members, department of public administration members, members of ANHRD, among other guests.

The aim of the National Psychology Week is to create awareness of psychology in general with a focus on the profession as practiced by psychologists in the different specialisations within the field.

Psychology, the scientific study of human behaviour, is important in everyday life as it helps individuals to understand themselves and others and to make sense of what goes on around them.

While the scope for practice and the need for a range of psychological services in Seychelles is evident from the demands expressed by individuals and organisations, the profession is still fairly new to the Seychelles community.

It has been observed that there is a lack of understanding among many members of the public as well as some professionals regarding the services that psychologists provide.

In some cases, people who could potentially benefit from intervention from a psychologist do not consider this as an option either because of a lack of awareness of what a psychologist does or from a sense of stigma.

During the seminar the psychologists focused on the current status and future of psychology in the country.

There are currently eight qualified psychologists in Seychelles and earlier this year two students were sent to Middlesex University’s Mauritius campus for a Bachelor of Science in Psychology.

A clinical psychologist receives up to 300 to 400 patients per year and there are only three of those practitioners in the country.

School psychologist Catriona Monthy said the main point is raising awareness about psychology among people from the general public and people who might consider taking psychology as a profession, as well as organisations that have to do with training and employment of psychologists.

Mrs Monthy pointed out that people in Seychelles do not really have the full picture of what a psychologist is.

“There is a lot of misconception around psychology, what psychologists do and what coming to see a psychologist means about yourself, so I’d say come forward  and find out more about it, talk to a psychologist and maybe some of those doubts that you have will get cleared up,” she said.

During this week presentations will be held in schools, work places and they will also be launching a facebook page along with other activities.

2015-11-12
Georges
Previous: Tourism Minister visits the MAIA Resort of Seychelles on his drive to remain in touch with Management and Staff of all licensed accommodation of the islands
Next: Stakeholders meet to discuss road safety