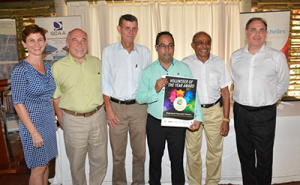 As an ardent supporter of the works of volunteer and holder of the civil society portfolio, Vice-President Vincent Meriton yesterday launched the second Volunteer of the Year award during a short ceremony held at the Constance Ephelia Resort.

During the ceremony, loyal partners of the Citizens Engagement Platform (Ceps) made their pledge towards the second Ceps Volunteer of the year award.

This award, which seeks to promote volunteerism at a national level, is being sponsored by Air Seychelles, Constance Ephelia, Seychelles Civil Aviation Authority (SCAA) and Vijay Construction.

The pledge was signed by the chairman of Ceps Jules Hoareau alongside the chief executive (CEO) of Air Seychelles Roy Kinnear, the resident manager of Constance Ephelia Sasha Tyas, the CEO of SCAA Gilbert Faure and the CEO of Vijay Construction Vijay Patel.

Constance Ephelia Resort will be hosting the Ceps Award ceremony and the Volunteer’s Ball on December 8, 2017.

The SCAA has partnered with Ceps in line with the culture instilled within the authority which encourages volunteerism among staff members.

Last year’s winner of the award, Rose-Mary Elizabeth, gave an overview of the first Volunteer of the Year Award while the runner up to the award Marie-Nella Azemia read the vote of thanks.

VP Meriton said the occasion is fitting to recognise the work of men and women who through self- dedication can make a difference in the lives of others and their community.

“Volunteerism honours the spirit of giving, caring and sharing and recognises the actions which unfortunately sometimes go unnoticed,” he said.

He said that volunteerism is a unifying force which can serve as a vehicle to promote durable bonds of friendship and solidarity among the population, our community and provides our citizens a platform to engage themselves positively and productively in the management of the affairs of the community,” he said.

VP Meriton said Ceps is creating a platform of opportunities to empower people to be better.

“Ceps allows people to generate the required social momentum that our society needs. The volunteer award initiative is certainly a positive step forward and its merits should be promoted within our schools as a means to deter our young children from drifting into delinquency,” he said.

Mr Hoareau said volunteers too do not have time but they make time in their busy schedule to help others and the community.

“The platform for civil society seeks to recognise the works of volunteers and the contributions they have made within their communities and the two recipients from last year have started different projects such as Youth Volunteers which is a component under the award which encourages the youth to join the civil society,” he said.

He said improvements will be made to this year’s award according to recommendations which they received from last year’s award and opening date where they will accept submissions for volunteers from different non-governmental organisations will be announced at a later date.

“Two of the recommendations made on the process of judgement are that judges visit the volunteers, and documents are made available to make sure volunteers have actually conducted intensive voluntary work during the year,” he said.

He said the volunteer will be judged on a 12-month time frame.