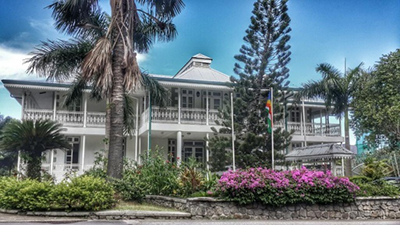 The Department of Foreign Affairs on Wednesday announced the rotation plan and appointments of the heads of Seychelles’ diplomatic missions abroad.

Foreign Secretary Claude Morel said that the new appointments “have been efficiently undertaken to place Seychelles in a position that will reap maximum benefit and foster stronger bilateral cooperation with other countries.”

The names of the ambassadors and high commissioners for Seychelles an archipelago in the western Indian Ocean, were revealed at a news conference Wednesday

Ronny Jumeau is the Seychelles’ Permanent Representative to the United Nations and will also be accredited as Ambassador to the United States of America.

Beryl Samson – now the ambassador to the headquarters based in New York — will head the Seychelles Permanent Mission in Geneva, Switzerland, beginning in January.

As of April this year, Seychelles will open a mission in Havana, Cuba which will be headed by Ambassador Joseph Nourrice.

Since February, Derrick Ally has been based in London, replacing former High Commissioner Marie-Pierre Lloyd, who has retired.

Two ambassadors to remain with their embassies are Selby Pillay heading the Seychelles’ mission in Brussels, Belgium since March 2015 and Vivianne Fock-Tave as head of the embassy in Beijing, China.

The High Commission of Seychelles in Pretoria, South Africa, is headed by Marie-Antoinette Rose who assumed her function in January.

The Permanent Mission to the African Union and the embassy in Addis Ababa, Ethiopia, will be headed by Ambassador David Pierre who will assume office once the Ethiopian authorities give their approval.

Ambassador Jean-Claude Adrienne will head the Seychelles’ mission in the United Arab Emirates and will assume office in May 2017.

Sylveste Radegonde has been appointed as ambassador to France and will take office once French authorities give their approval.

Ambassador Bernard Shamlaye will be retiring from the diplomatic service in May.

Speaking to the press, Morel said that diplomacy is not static but is rather a revolution.

“In line with the vision of the head of state, Danny Faure, it is important that we pragmatically and strategically appoint ambassadors in targeted jurisdictions that will reflect the current status quo and changes in the world of diplomacy,” Morel said.

He added that the new embassy expected to open in Cuba will help the country to negotiate for health professionals.

The foreign secretary added that these strategic placements will enable Seychelles to defend its economical and political interest internationally.

The appointment and rotation of the ambassadors is a prerogative of the head of state and is done through consultation with the Department of foreign affairs.