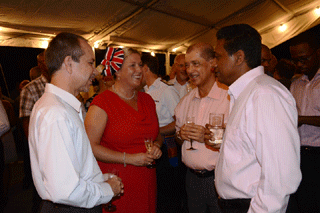 This year Her Majesty celebrates the 62nd anniversary of her coronation and the  event was to celebrate her dedication, service and commitment she has shown for more than six decades, not just to the United Kingdom and her realm countries and overseas territories, but also to the Commonwealth of which Seychelles is a prominent member.

Guest of honour at the reception was the President of the Republic, James Michel. Also present were Vice-President Danny Faure, the Minister for Foreign Affairs and Transport Joel Morgan, other ministers and distinguished guests.

Mrs Skoll chose the moment to mark her formal farewell and described it as a sad moment for her as it will be the last function she hosts here as her time as British high commissioner to Seychelles.

She will be taking a new post in the Foreign and Commonwealth Office in London. She said her tenure as British high commissioner to Seychelles has injected a new dynamism into a modern and vibrant British-Seychelles partnership.

“Gears are in motion to appoint my successor, and fresh duties await me in London. But before embarking on the next challenge that the Foreign and Commonwealth Office sees fit to lay before me, I want to celebrate all that we have achieved in Seychelles during my time as high commissioner, and the successes that I do not doubt lie ahead in this remarkable country’s future,” said Mrs Skoll.

She then went over the successes that have been achieved for Seychelles under her years in office where she has used her passion, as she said, and energy by adapting them to the Seychelles context which she said has provided fruitful partnership and positive outcomes.

Among the achievements during her term in office she mentioned the fight against piracy and maritime crime where she commended Seychelles’ leadership and pragmatism in rising to that challenge with the full support of the British government; disability rights and empowerment; the hosting of the Queen’s Baton in the build up to the Commonwealth Games in Glasgow in 2014; work on gender-based violence, empowering women in business, maternal and mental health support and against child abuse; the work done at Montagne Posée; awards of Chevening Scholarships to Seychellois professionals, to name some.

After welcoming the crew and officers of HMS Richmond to Seychelles, Minister Morgan paid tribute to Her Majesty Queen Elizabeth II. He reflected on her long life and eventful reign, and her unfailing devotion to duty and the solid values that she has exposed throughout the years as sovereign of United Kingdom and her other realms.

“Under her wise guidance, the United Kingdom continues to prosper and continues to position itself to face an ever-challenging world. The Seychellois people have much respect amd affection for Her Majesty and what she stands for. Many of us still have fond memories of her visit to Seychelles in 1972,” said Minister Morgan.

He also said Her Majesty Queen Elizabeth has worked tirelessly in ensuring that the Commonwealth family members remain close and that the organisation grows and adapts to new challenges.
“She is mindful in engaging young people to ensure the survival of the organisation,” remarked Minister Morgan.

The minister also noted that Britain remains one of Seychelles’ valued developmental partners, bilaterally and through international bodies such as the European Union and that the two countries have capitalised on the friendship and history that they both share to collaborate at even greater levels.