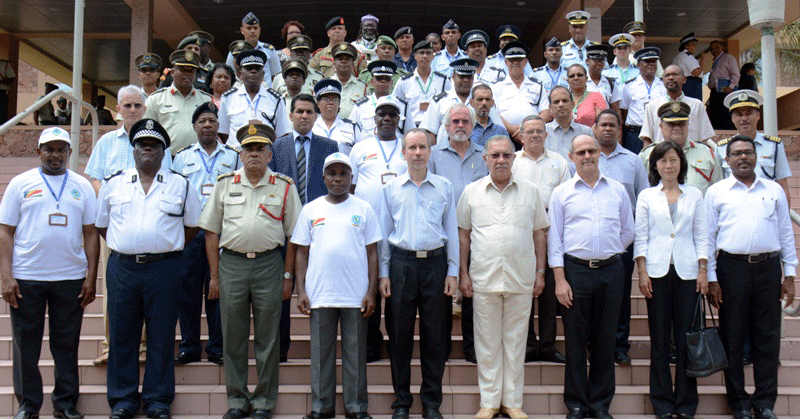 Seychelles is hosting a series of meeting of the Eastern Africa Standby Force (EASF).

A series of four meetings which started with the EASF Day yesterday at the International Conference Centre (ICCS) will take place during next week.

Delegates from five Eastern African countries including Seychelles are taking part in the meetings.

EASF Day, which is held in different member countries, is a unique opportunity to bring together a cross section of people interested in or working for peace in the Eastern Africa region to learn more, share ideas and experiences on common issues using a unique and effective approach – the Standby Force approach.

Established by governments of Eastern Africa in a shared understanding of the urgent need to provide security and peace for the region, the EASF is mandated to address present security threats and conflicts and prevent future conflicts from escalating into large scale military conflicts, civil wars and genocide.

Seychelles currently chairs the council of ministers of defence of the EASF and the Minister for Foreign Affairs and Transport Joel Morgan is the chairperson.

Addressing guests in remarks to open the EASF Day meeting yesterday, Minister Morgan said the event is of great significance as it highlights the importance of the EASF as an indispensable partner in the peace-building process of this part of Africa and the rest of the continent and the contribution of this process to global peace.

“Very few countries in our region can today claim to be free of conflict because as we have seen conflicts spill over borders, hence making it important for the region to equip itself with a collective response mechanism,” Minister Morgan said.

He added that as the smallest country in Eastern Africa, Seychelles prides itself on having contributed its fair share in the evolution of EASF to its present status of the most advanced of the five EASF.

The EASF has spent several years training its personnel and building capacity to respond to the various crisis using an integrated approach that includes military, police and civilian functions.

“EASF is part of the process of finding African solutions to problems in Africa,” Minister Morgan said.

During the meeting yesterday there were different presentations and screening of a short film on the EASF, conflict in the region and their effects, role of civilians in peace-keeping as well as a panel discussion.

2016-03-14
Georges
Previous: Military not just any other job, says Seychelles’ newly promoted — and only — female major
Next: Zedmo e Proverb