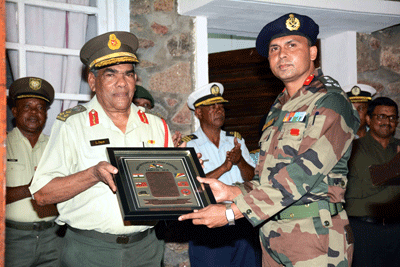 The 7th joint military exercise between India and Seychelles military forces came to a close on Saturday morning with a final attack scenario where suspected pirates had escaped at Cap Ternay.

Senior defence officers from both armies and other dignitaries including the principal secretary for Foreign Affairs Maurice Loustau-Lalanne and the Indian high commissioner to Seychelles Sanjay Panda witnessed the final phase of Lamitye exercise Sea Hunt on Saturday morning at Cap Ternay.

In the evening a ceremony was organised at the Seychelles Defence Academy on South East island to formerly close Lamitye 2016 and thank the forces from both countries for another successful exercise.

Addressing guests gathered at the event on Saturday evening, Brigadier Michael  Fernandez, the exercise brigade commander, said the exercise has strengthened the long existing friendship between the Indian and Seychelles armies.

“The bonding between our two armies have cemented itself over four decades of close cooperation and association and the exercise Lamitye is yet anotheropportunity for us towork together, to redefine our skills, to remain sharp, focused and confident while analysing and reviewing our approach to tackle and mitigate the myriad potential threats to our nations’ sovereignty and integrity,” Brigadier Fernandez said. 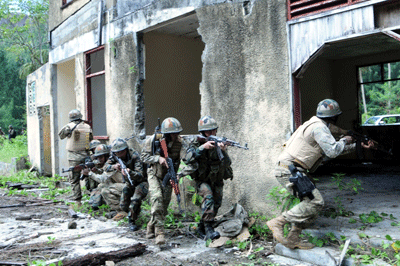 He pointed out that India and Seychelles are both vulnerable to threats given their respective geographical locations.

“The island nation of Seychelles is particularly prone to threats from the maritime domain,” Brigadier Fernandez noted, adding that Exercise Sea Hunt, the final phase of Lamitye held earlier Saturday morning at Cap Ternay, was yet another opportunity to better strengthen the preparedness of our forces to neutralise potential threats to our nations.

Having been part of the exercise and having closely witnessed the bond between our two forces reinforce and strengthen, Brigadier Fernandez assured the SPDF “that when rough weather approaches and trouble threatens, the SPDF and Seychelles can count on the Indian armed forces and the Indian nation to stand by you, shoulder to shoulder to mitigate such trouble at the earliest and to restore peace, tranquility and sovereignty of your beautiful country”.

Brigadier Fernandez and Brigadier Leopold Payet, the chief of Seychelles Defence Forces,  exchanged mementos as a sign of friendship and growing cooperation. Commanding officers from the different units who took part in the exercise also accepted souvenirs to remind them of this 7th exercise.

HC Panda, commending the two countries’ forces, said “it was indeed an excellent opportunity for the two forces to work together and learn from each other for over two weeks”.

From the feedback he said he received as the exercise unfolded, Mr Panda described it as “substantive, professional and successful”.

“Our two countries and armed forces have achieved much and the exercise has been testimony to the defence and security cooperation and unique strategic partnership that the two countries share,” Mr Panda said.

He added that the exercise also provided great and unique opportunities for both our forces to develop and execute military plans and to learn from each other’s experiences and laid the foundation for more and strengthened cooperation.

In remarks to officially close Lamitye 2016 Brigadier Payetsaid after going through the exercise setting and training programme and witnessing the final assault of the exercise earlier on Saturday, morning he is convinced and adequately satisfied that the two forces have learned a lot during the two weeks.

“I am happy to note that the exercise has evolved and progressed throughout the years and that the planners from the two countries have worked and concentrated on scenarios that are current and well adapted to cater for our immediate and long-term needs, taking into account common threats and also integrating lessons learned from previous exercises,” Brigadier Payet pointed out.

SPDF chaplain deacon Louis Agathine offered prayers of thanks for the safe unfurling of the exercises.