SPTC gears up for arrival of 34 new buses 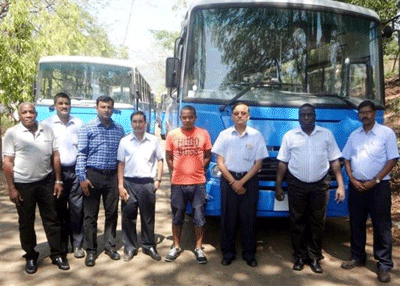 The Seychelles Public Transport Corporation (SPTC) has confirmed that 29 new buses will arrive on March 10 and five others in April this year.

This follows the announcement late last year of the introduction of new buses to the company’s fleet.

Recently, SPTC’s chief executive Geffy Zialor along with engineers from SPTC visited India for final inspection of the TATA buses.

The 50 and 40-seaters have more or less the same features as the existing buses in the SPTC fleet.

“The new buses will further improve service delivery which is an SPTC priority. In addition this move is aimed at replacing aged buses in the fleet to address complaints from commuters and drivers alike,” a press release from the company says.

The 34 buses, financed under a grant from the Indian government, has cost slightly over R22 million.

During the course of this year another 30 new buses will be added to the SPTC fleet and as part of its on-going fleet replacement plan, Seychelles’ largest public transport company will introduce 105 new buses to its fleet between 2016 and 2018.

“As SPTC focuses its attention on improving commuter safety and service level, it is imperative that commuters also do their part by respecting the buses. While SPTC acknowledges that last year it invested substantially in repairing seats on account of wear and tear, an increase in seat vandalism was also observed. SPTC is therefore appealing to its commuters to use its buses and all other associated facilities with care,” adds the press release.