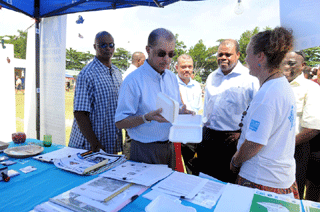 During the National Show held at Grand Anse Praslin last month to coincide with our National Day celebrated for the first time on June 29 together with our Independence Day, many companies and organisations displayed their products and services.

Many people visited the exposition including the President James Michel, who described the exhibits on offer as a progress in time as the majority of exhibitors were showcasing the progress they have made from past to present; from the old to the new with the introduction of new technologies and new ways of doing things.

Sustainability for Seychelles, a non-governmental organisation (NGO) responsible for the preservation of the environment, was also there educating the public on environmentally-friendly products and services. One of them was the biodegradable take-away boxes they were introducing to those concerned on a trial basis. 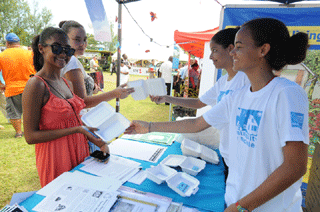 “We have 10,000 boxes to test,” said Michelle Martin of that NGO when explaining to the viewers the raison d’être behind such boxes.

She added they were of 100% sugar fibre which are better for health and the environment and are very biodegradable. The boxes are from South Africa and costs R2 each.

Sustainability for Seychelles is not testing those boxes just for the fun of it. They have undergone background research on the alternatives to polystyrene take-away boxes that are being currently used in Seychelles.

www.nation.sc brings you an update of their findings which they released to the public during the Praslin trade fair.

The process of polystyrene production causes air pollution, and creates large amounts of liquid and solid waste, and the polystyrene itself is estimated to take hundreds to thousands of years to biodegrade. Polystyrene’s total ecological impact (from cradle to grave) is estimated to be exceeded only by aluminium.

Some types of combined polystyrene/starch products have been developed to improve the biodegradability of polystyrene boxes – the starch breaks it down but minute particles of polystyrene remain in the environment causing invisible pollution.

According to Sustainability for Seychelles, in Seychelles, there are 155 licensed and active take-aways. Every day members of the public use and discard an estimated 100 polystyrene boxes from each establishment. That adds up to about 4 million take-away boxes per year.

Many take-aways, importers and consumers in Seychelles have expressed an interest in trying out biodegradable alternatives to polystyrene boxes if the price is in similar range to the current boxes in use (R1).

In 2011 the US government listed styrene (a building block of polystyrene which is used in a variety of products including food containers) as a potentially carcinogenic substance, based on research done by the Department of Health and Human Services.

Polystyrene containers leach styrene when they come into contact with warm, oily or acidic food or drink.

A model study done on the Pacific garbage patch showed that limiting polystyrene boxes could significantly reduce the amount of plastic debris in the ocean.

Sustainability for Seychelles believes the government of Seychelles should consider a ban on polystyrene boxes for food and drinks. The environmental and health research provides evidence to justify this and there are many precedents in other countries.

They also believe the government should consider waiving import and other taxes on biodegradable food and drink packaging which meet agreed health and environmental standards, in order to create a more economically enabling environment to support a shift away from polystyrene.

Local industries fabricating biodegradable containers for food and drinks that meet environmental and health standards should also be encouraged.

2015-07-10
Georges
Previous: All you need to know about the Seychelles National Culinary Contest 2015
Next: SITRONNEL