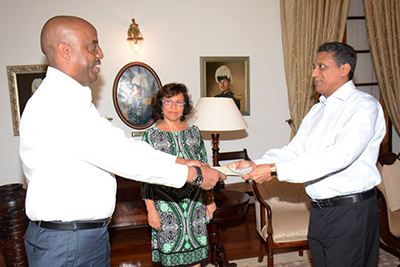 Eugene S. Kayihura is the new high commissioner of Rwanda to Seychelles while Philip Jada Natana is the first ambassador of South Soudan to be accredited to Seychelles.

Both diplomats separately presented their credentials to President Danny Faure at State House yesterday morning following which they in turn paid a courtesy call on Vice-President Vincent Meriton.

High Commissioner Kayihura is based in Dar es Salaam, Tanzania while Ambassador Natana is based in Pretoria, South Africa.

Speaking to the press soon after his talks with the two Seychellois leaders, Mr Kayihura said he is looking forward to continuing to work with Seychelles in several areas namely tourism, investment promotion, business development among many others.

“The discussions I have had with the two Seychellois leaders focused on ways to expand trade and investment between our two countries as well as further develop and solidify our bilateral cooperation. We really want 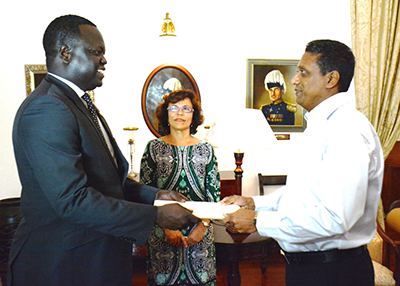 to explore tourism development as the two countries have a lot to share and learn from each other in that sector,” Mr Kayihura said.

His country’s third diplomatic representative to Seychelles, Mr Kayihura described the discussions with the two Seychellois leaders as “excellent, open and frank” and added that he is looking forward to further strengthening cooperation between the two countries in numerous fields during his four-year mandate.

As for the South Sudanese ambassador he described his accreditation as a historic day for him and the people of his country.

“I had very fruitful discussions with President Faure and we discussed various issues of concern to both our countries especially peace and stability. I am really looking forward to working very closely with the Seychelles government, seeking its help and support to help us stabilise our country. We also want to learn from Seychelles’ experience on how to develop the potential of the youths and this through education and Seychelles with a high literacy rate I believe has a lot to share in that area,” Ambassador Natana said.

Also his country’s ambassador to South Africa, Mr Jada said he is looking forward to strengthening cooperation with Seychelles in as many areas as possible, noting that the two countries have been talking a lot through Seychelles’ embassy in South Africa.

He said his country has a lot to learn from Seychelles’ experiences in many sectors.

“I have never been here before but I have learned a lot of good things about Seychelles and Seychelles was among the first countries that recognised us after our independence in 2011 and I believe I will enjoy working with Seychelles,” Mr Natana said.