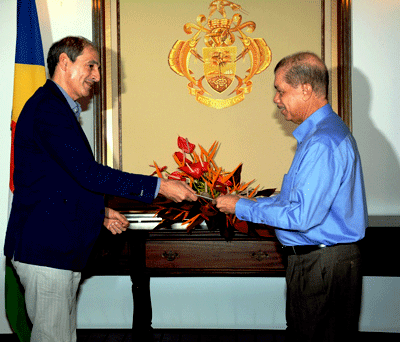 Two new foreign ambassadors have been accredited to the Republic of Seychelles. They are Ambassador Francisco de Borja Montesino Martinez del Cerro of the Kingdom of Spain and Ambassador Lászlò Eduárd Mathé of the Republic of Hungary.

They both presented their credentials to President James Michel at State House yesterday morning.

As is the tradition for all new ambassadors, they were greeted by a guard of honour upon arrival at State House.

President Michel thanked Spain for its good will and help over the years in the fight against piracy, in the EUNAVFOR’s Operation Atalanta.

Talking to the press after meeting President Michel and also Vice-President Danny Faure, the two ambassadors said they have discussed areas of interest and of cooperation between their respective countries and Seychelles.

Ambassador Del Cerro, who replaces Miguel Fernandez Palacios and who will be based in Addis Ababa, Ethiopia, said Spain has a long lasting 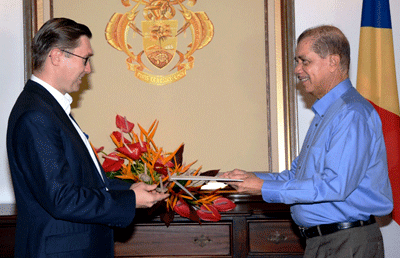 presence in Seychelles particularly through tuna fishing, adding that the relation between his country and Seychelles is not rhetoric but a real one.

He further stated that the cooperation has been recently strengthened by his country’s involvement in the fight against piracy in the Indian Ocean and with the regular visits of Spanish war ships to Port Victoria.

The Spanish ambassador added that he has identified the Blue economy, renewable energy and the promotion of the Spanish language and culture as future areas of cooperation.

The fourth Ambassador of Hungary to Seychelles, László Eduárd Máthé was accompanied by the Seychelles Honorary Consul based in Hungary, Laszlo Kiss.

President Michel congratulated him and together they spoke about how they can enhance bilateral cooperation between Seychelles and Hungary in the fields of education, as well as medicine, sports and capacity building in various areas.

Ambassador Mathé commented that although they are far away from each other, Seychelles and Hungary share many similarities and that during his tenure in office, he will see that cooperation possibilities are pushed even further.

He mentioned the fields of education where Seychellois students are studying in Hungary, as well as sports development.

He added that as a country which has produced Olympic champions in various sports, Hungary can help Seychelles in sports education and high level sports.

Ambassador Mathé will be based in Nairobi, Kenya.

2015-11-18
Georges
Previous: Violent extremism has no place in this world’ – Mancham
Next: Seychelles artists and historian showcase the origins of the islands’ Creole nation