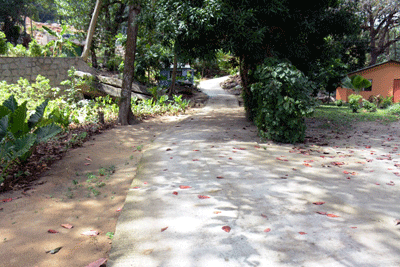 The contracting company working on the project to build a new Boule de Neige road on La Digue has been facing certain delays which despite its best efforts to resolve, was unable to do so.

The issues faced were brought to the attention of the Seychelles Land Transport Agency (SLTA) during a meeting on Wednesday August 17 on Mahé.

According to a communiqué, the SLTA said it has taken into consideration the issues and will follow up on them.

The SLTA and the contracting company as well took note of certain reports made in certain politically affiliated newspapers citing impropriety in the tender process or other unsubstantiated allegations which had been directed towards the contractor and to SLTA in the manner the scope of work had been carried out by the contractor or supervised by the SLTA.

“It is not uncommon and always regrettable that unconfirmed sources are used when writing such articles and that these publications rarely if ever contact us or the contractor for that matter to confirm the veracity of such reports. We can understand, however, why these publications do so as they are sensational and serve their vested interests. Our meeting with the contractor allows us now to fully understand his concerns and issues, and to move on together so that they can now complete the project to plan,” said SLTA chief executive Parinda Herath.

“We are fully committed to completing this contract despite the delays encountered and after our further meeting this day with SLTA management, we are confident that we will be able to deliver a quality product that will be well utilised and appreciated by the La Digue community for years to come.  Coming from La Digue we are doubly proud that we are contributing to the development of La Digue and in support of the government’s development project.  We are keenly aware of the environmental concerns and pressures that any development project may cause or bring to La Digue and conscious of that fact are resolved to ensure that when we are 100% complete, we will leave nothing behind that could impact the life of the island community.  We continue the work on the road and have committed to SLTA to have this project completed by end October 2016,” said the representative of the contractor.

The tender process for the Boule de Neige project received six bids to the National Tender Board, with tender opened on October 28, 2015 at 10am.  The contractor with the accepted bid received its letter of commencement for January 25, 2016 and was targeted to complete the project in the month of June 2016.

“We are resolving the issues and we now look forward to having this road completed as they have committed to do within the coming two months,” said Mr Herath.