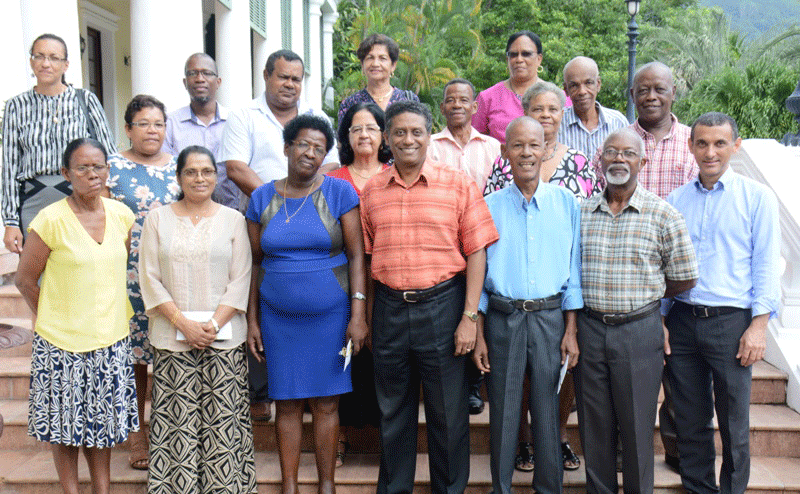 Vice-President Danny Faure yesterday met some long-serving retirees at State House as part of his programme of meeting with long-serving public servants.

The retirees urged the young people to love their job so they can also spend long years in it.

The retirees were all from the public sector and their years of service range from 25, 27, 33, 35, 36, 41, 42, 43, 45 to 50 years. They are from the Seychelles Civil Aviation Authority (SCAA), Seychelles Fishing Authority (SFA), Seychelles Police; Foreign Affairs, Home Affairs and Health.

The longest-serving public servant is Therese Cafrine, a nurse from the Orthopaedic Section of the Ministry of Health. Mrs Cafrine is now 68 years old and started work in 1965 at the age of 18 years.

“I did general nursing for quite some time, then I went to England for a two-year course in orthopaedic nursing. I have worked in all wards, on other islands like Silhouette, La Digue and Praslin and spent quite some time at the Anse Royale hospital. And recently I worked for five years at the Rehabilitation Centre. Last year my contract expired and I did not want to renew it so I decided to work part-time but only in orthopaedic medicine,” said Mrs Cafrine.

Mrs Cafrine said her love and devotion towards nursing kept her in that career for this length of time. She also loves working with orthopaedic patients as she receives great satisfaction in doing so.

“They undergo their surgery, they get well, they get back in the community and work. They call for advice and I act like a ‘bridge’ between them and an orthopaedic doctor until they can get to see such a doctor. It involves a lot and one needs love and joy to do it,” she said.

Mrs Cafrine works part-time from 8am to 12pm. Therefore by 1pm she is home and can rest as from then. Her advice to people still in employment is for them to love their job as this is the key to a long career.

Tony King has served forty-three years in civil aviation in civil brigade as a fireman at the airport. He also started work at 18 years old and just retired last November.

“I never changed my job because I was ambitious. When I was little and I saw planes passing by I always commented on them. And at that time we called them jets. And when I heard they were looking for firemen to work at the airport, I applied for the job,” said Mr King.

His advice to the young people: “Have love when looking for a job. Don’t just get a job then leave. Look for a job that you love so that you will work in it until you retire,” said Mr King.

Mr King will really rest as from now on as 43 years of night duty has taken its toll.

2016-02-08
Georges
Previous: New gospel CD out
Next: An extraordinary visitor to Seychelles