The show, held on the eve of the anniversary, was organised by the Hindu Council of Seychelles in collaboration with the Indian high commission in Seychelles, a first of this nature. It kickstarted with the lighting of the traditional lamp. 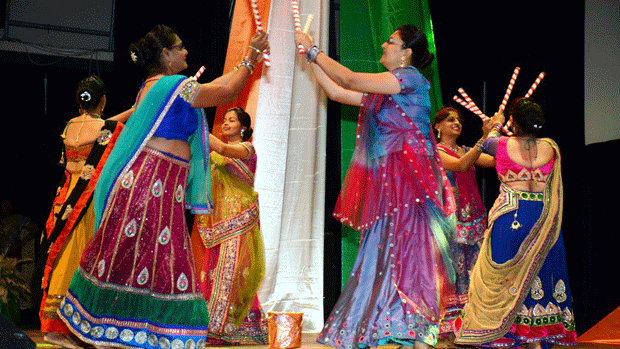 The MC for the occasion aptly described the evening from a quote of Mahatma Gandhi:

“A nation’s culture resides in the hearts and the soul of its people”. She said being Indians, they take so much pride in their culture and one very important aspect of their culture is music. Music gives soul to the universe, wings to the mind, flight to the imagination and life to everything.

The highlight of the evening was the performance by one of India’s best known singers MJ Shri Ram, who won the best singer award. He swept the audience off their feet with magical melodies of Indian cinema. He was accompanied by his wife Srilekha Partasarathy who has also made significant steps forward in the film and music industry of India, and Anne Akhila, also well known in that area.

There were also songs and dances by performers from the Indian community in Seychelles.

In his short address, HC Panda complimented the Hindu Council of Seychelles for organising an event of this nature.

He complimented the community for maintaining the tradition and culture of India.

As for Mr Ramani he expressed his appreciation on behalf of the Hindu Council for organising such an event.

He explained why the council has stepped in to organise it, describing Hinduism as one of the oldest religions in the world, which preaches peace and was in existence much before the union of India was created by the Indian forefathers.

Traditional shawls and mementoes were presented to participants, including Shri Ram, Sri Lekha and Akhila by both Minister Meriton and HC Panda.

Mr Ramani and other members of Hindu Council of Seychelles presented certificates and mementoes to the other performers.

The accompanying photographs show highlights of the cultural show.