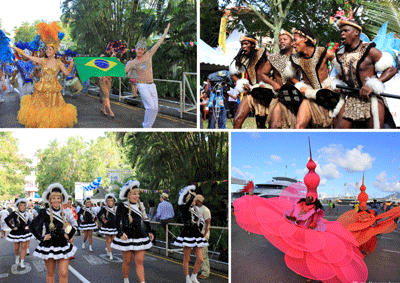 Stephen Spark of SOCA NEWS in the United Kingdom writes:-

From the perspective of a country where Carnival is at best tolerated and more often condemned as a noisy, dangerous nuisance, it comes as a pleasant surprise to find a continent where carnivals are not just appreciated but actually considered for awards.

For the past six years, Seychelles’s Carnaval International de Victoria has attracted participants, visitors and media attention from around the world. Now, Soca News confirms that this event has reached the shortlist of the Africa Travel Awards in the African Culture category.

St Ange said in a statement, “We… put our culture at the centre of our tourism industry, and by doing that place our people at the very centre of our development.”

The nomination is something of a personal triumph for St Ange, as he was instrumental in getting the first carnival on to the streets of his country’s capital in February 2011. It is largely through his efforts that the event’s momentum has increased every year, so it is entirely appropriate that the minister himself is on the shortlist for Best Tourism Minister in Africa.

Also on the Best Minister shortlist is Zimbabwe’s Walter Mzembi, who has been a driving a force behind the Harare International Carnival – which is based on the Seychelles model. In the African Culture section Nigeria’s Carnival Calabar is also vying for the top spot.

Nominees for the Africa Travel Awards are assessed by a panel of travel experts and voting thrown open to the public. Its website states that it is “a survey by Africans for the best performers in Africa”. Voting closes on 2 October and the winners will be announced in Lagos, Nigeria, on 30 October.