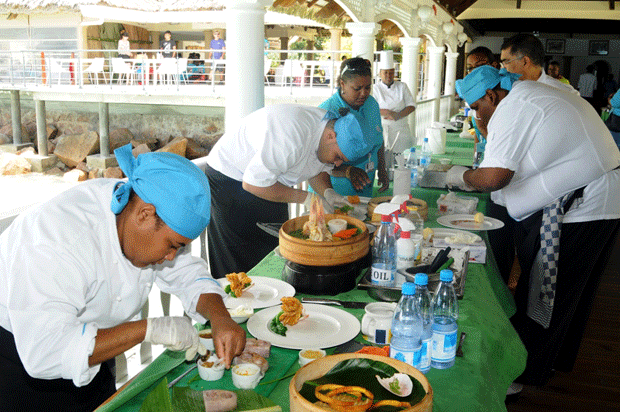 Now in existence for over five years, the Seychelles National Culinary Competition continues to strive to expand its programmes and offering to the Seychelles Tourism Academy (STA) students. Financial support is extremely important to the academy as they depend on donations to purchase new equipment for the continuous training of the students each year in order for them to fulfill their courses. Therefore ISPC Seychelles has made it as their mission to the STA.

www.nation.sc brings you more detailed information on the Seychelles National Culinary Contest 2015 which was recently officially launched by ISPC Seychelles and its partners at the company’s premises on Bois de Rose.

The competition will be organised in three steps: the 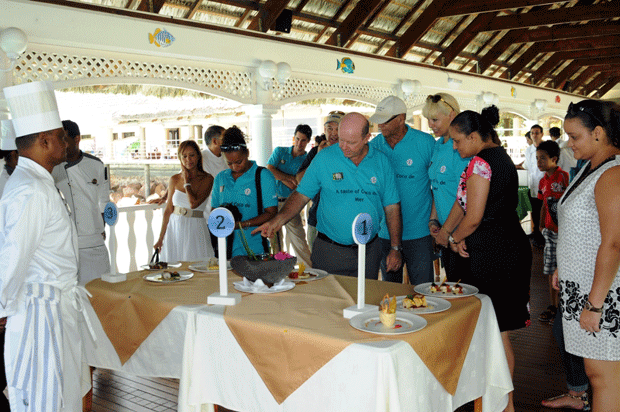 Starter Contest, the Main Course Contest and the Dessert Contest. After the three competitions, the overall winners will receive their prizes at a charity gala dinner during which each winner will serve his/her winning dish to the guests. The gala dinner will be a fund-raising event in aid of STA (infrastructure and services).

Subscriptions for the Starter Contest must be submitted by July 31, 2015.

The preliminary test (if needed) will be held at La Plage restaurant on August 3, 2015.

Subscriptions for the Main Course Contest must be submitted by July 31, 2015.

The preliminary test (if needed) will be held at La Plage restaurant on August 4, 2015.

Subscriptions for the Dessert Contest must be submitted by July 31, 2015.

The preliminary test (if needed) will be held at La Plage restaurant on August 5,  2015.

All contests are open to all Seychellois culinary professionals – chefs, cooks, and production personnel employed in Seychelles. The same contestants can take part in all three contests.

Contestants must be at least 18 years old and must be employed by the hotel/restaurant he/she is representing for at least three months.

If more than five competitors enter a contest, a preliminary test will be held at La Plage restaurant, Beau Vallon, with all applicants. They will be submitted to a thereotical test (multiple choice questions) and practical test (a testing test) in order to select the five finalists.

Contestants from inner and outer islands shall be accommodated at the STA.

All entries must be mailed before July 31, 2015 to ISPC Seychelles.

Entries must be sent my email by filling out the entry form below and send it in an attachment to the following address: sncc@ispc.sc

The first round of the contest (if there are more than five contestants per category) will be held on August 3, 4 and 5, 2015 at La Plage Restaurant, Beau Vallon.

Based on the result of this first round (multiple choice questionnaire and testings), five chefs will be selected for the final.

The finals will be held at STA:

Recipes must use the following mandatory ingredient:

Individual competitors will have 2 hours (3 hours for the final of the Dessert Contest), with five additional minutes for plating to prepare six portions (5 plates are needed for the judges and one form photography) of an original dish featuring the mandatory ingredients.

Each competitor will be helped by 2 commis of the STA (randomly chosen just before the contest).

Each competition cooking station will be supplied with the following equipment: 4 gas burners, 1 gas oven, I sink and large Inox working tables.

1)    Recipes will be judged on taste, originality and appearance. Recipes must be original.”Original” is defined as not previously published in the same or substantially the same form. Contestant finalists will be required to certify that the entry is “original.”

2)    Winning recipes will be judged by a qualified jury of 5 persons. The President of the Jury is Mr Lionnel Rigolet, the famous 2 Michelin Stars Chef of the equally famous restaurant Comme Chez Soi in Brussels. This year Mr Eric Boschman, best Belgian head waiter in 1988, Best Sommelier in 1989, will form part of the jury. Eric has worked in famous restaurants in Belgium such as Le Barbizon, Romeyer or Chez Bruneau. He has written several books and is a renowned expert collaborating actively with famous newspaper, magazines and TV shows.

Winners will be announced on the day of the finals directly after the final.

The winner agrees to prepare, present and serve (with the support of STA students or their own staff), their winning dish for the Gala Dinner. All necessary ingredients will be supplied freely by ISPC Seychelles.

Air Seychelles, Cable and Wireless and Constance Hotels and Resorts are the faithful sponsors.

The three final winners will receive each a flight ticket from Air Seychelles; 7 nights in the 5-Star hotel of the Constance Belle Mare Plage of the Constance Hotels and Resorts and €800 (R12,000) cash from Cable and Wireless.

Runners-up and third place finishers will also receive prizes such as famous and chef’s preferred knives from the famous brand ‘Global’, Heineken prizes as well as kitchen and table equipment for professionals.

2015-07-10
Georges
Previous: US Development Finance Programmes – Opportunities to team up with US businesses
Next: Sustainability for Seychelles tests biodegradable take-away boxes