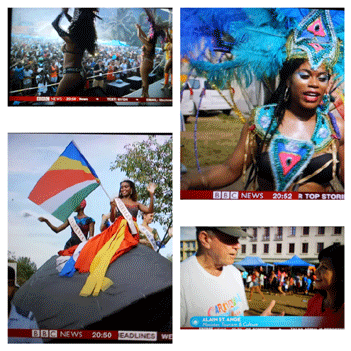 Footage from the 5th edition of the Seychelles’ Carnaval International de Victoria that was held last April was beamed across millions of TV screens last weekend, highlighting the excitement and uniqueness of this major international event which takes place every April in Victoria in the Seychelles.

Major broadcasting house BBC carried out the story as part of its BBC Travel Show on both Saturday and Sunday, and it reached millions of homes around the world. The show is a series showcasing the best of travels across the globe.

BBC attended the carnival in the Seychelles’ capital last April, as part of the large international press contingent providing coverage on the event.

BBC’s Carmen Roberts presented the short programme from the actions of the carnival on April 5 in Victoria, whereby she interviewed organisers and participants, as well as joined in the fun of the colourful float parade.

Several hundreds of local and international participants paraded the streets of Victoria with their floats, to the accompaniment of cheerful and pulsating music which kept everyone on their feet.

The public had come down in large numbers and occupied every nooks and crannies in Victoria, as they actively participated in the carnival and danced along with the participants.

The Seychelles’ Minister for Tourism and Culture, Alain St.Ange, was also interviewed by BBC and he said the carnival is achieving its role of raising the nation’s profile before a sizeable representation of the world’s press. He also added that the event provides an attraction for both the tourists and Seychellois public.

This was the second consecutive weekend that Seychelles made it on the BBC Travel Show after the previous’ week story on the island’s maritime plan and also fishing experience on the islands.

2015-06-23
Georges
Previous: Seychelles new beauty queen and her princesses are on the move
Next: Lise Sadler – Natural art Gallery