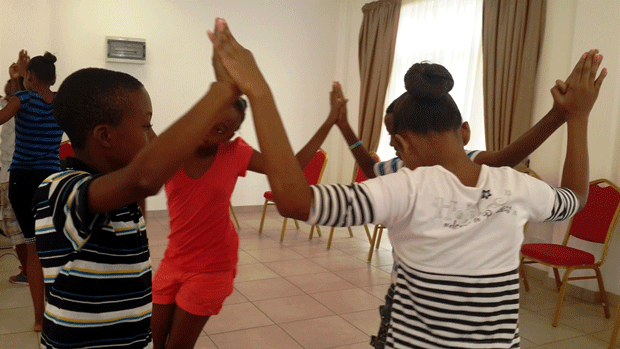 The 12 children taking part in the International Children Friendship Festival to be held in Normandie, France, next month are ready to showcase their talents in a musical show this Saturday at the International Conference Centre.

For the past few weeks the children have been training intensively under the guidance of artistic directors Bennett Accouche and Mary-Anne Amade.

Speaking during a break in yesterday’s training session Mr Accouche said the children have been giving the best of themselves.

“In general I am pleased with the rehearsal sessions. So far so good, the children are ready for the show on Saturday,” Mr Accouche said.

A total of 12 Seychelles children aged between 10 and 13 will be taking part in the International Children Friendship Festival (ICFF) which will be held in Normandie, France from June 1-12.

These children have been rehearsing tirelessly to prepare themselves for the festival.

Mr Accouche said the children will be performing traditional dances as well as local and Creole music. But at the festival itself the children will also be able to enjoy themselves in some sports activities with their counterparts from other countries.

The Office of the Ambassador for Women and Children received the invitation to attend the International Children’s Festival in Normandie, France.

The highlight of this festival in Normandie, other than the exchanges our children will have and the performance of our folkloric and traditional dances, will be the presence of Malala Yousafzai and Kailash Satyarthi, both laureates of the Nobel Peace Prize in 2014.

The musical show on Saturday along with country and Western band Breeze will be aimed at raising some funds to help the children on their trip.

Country music and traditional music lovers, and all those wishing to lay back and enjoy some relaxing music, here is a chance not to be missed.

Tickets for the show are on sale at R125 apiece at Ray’s Music Room. There will also be tickets on sale at the door before the concert which will begin at 7.30pm.

See you there. Come and support our children who will be going on this international adventure.