Popular Christmas songs like ‘Silent Night’, ‘Deck the Halls’, ‘Oh Holy Night’, ‘Bons Baisers de Victoria’, ‘Peuple Fidèle’, ‘Let It Snow’, ‘Rudolph the Red Nosed Reindeer’ to name some, and Creole favourites like ‘Zetwal File’, reverberated in the conference centre as children dressed in very attractive and glittery Christmas attire sang their hearts out on this moment of joy, love and sharing which is Christmas.

This year’s Christmas show saw the appearances of some newcomers like One Memory Choir and Independent School Choir. Leo Hoareau was the guest artist with the song ‘Last Christmas’ while Benneth Accouche directed the event.

Father Christmas also made an innovative entry on stage this year to distribute gifts. He sailed in a pirogue loaded with gifts for the children.

The gifts were later distributed to representatives of each choir by the president and his daughter.

The Christmas Carols Show 2014 ended with a medley of Christmas songs by all those who took part. 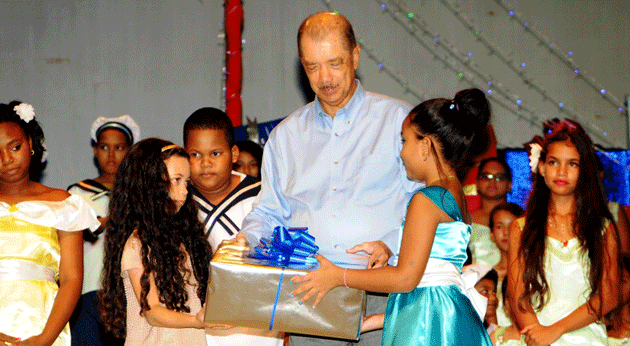 2014-12-22
Georges
Previous: Seychelles Minister takes time off his break to hold video press conference to discuss the island’s tourism industry saying it is time for the Nation as a whole to embrace tourism
Next: Development on Creative Industry within Indian Ocean Islands ends on fruitful deliberation