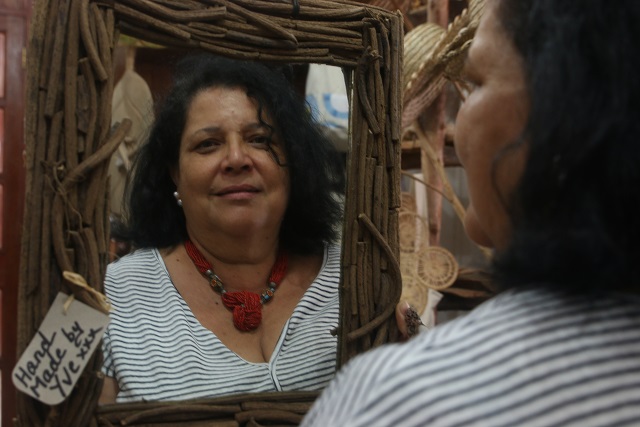 A Seychellois craftsman is making art out of invasive creepers that the authorities are trying to control so they don’t disrupt the island’s natural ecosystem.

Eve Breithaupt of Port Glaud, a district on the western side Mahe, the main island, said instead of just destroying the creepers, she collects and moulds them into valuable objects like baskets, mirror frames and lampshades.

Breithaupt uses all kind of creepers that grow in lowland areas close to her house, and she said that she has to uproot the whole plant to be able to use it in her craft.

“After that, I put the plant in a barrel of water for a day to remove its rigidity. I then remove it, put it in the shade to dry for some time, but not too long, as it can become too thick again, making it difficult to weave it into an artifact,” she said.

The local craftsman said she likes to accentuate mirrors with the creepers as the brownish colours, give them a special effect, especially when placed in homes or offices.

The right placement of mirrors can bring beneficial energy to specific areas of your home or office. Mirrors are the perfect representation of the water and always bring the energy of refreshment and calm into any space. Therefore, having it blended with creepers, found in the environment, gives it a more aesthetic appeal,” said Breithaupt.

Alien invasive creepers have been identified as a threat to the ecosystems and natural areas of Seychelles, a group of 115 islands in the Western Indian Ocean. They are common in all habitats of the island nation and the highland forests. Recently they have expanded in lowland areas, and some of these species have started to invade the natural areas. 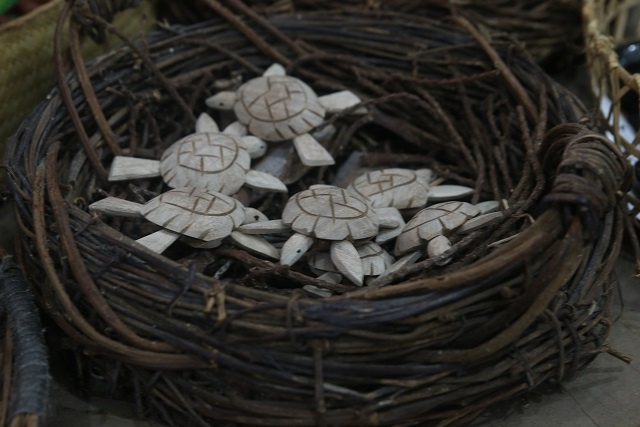 As a result, the Ministry of Environment, Energy, Climate Change in collaboration with the Seychelles National Parks Authority have embarked on a five-year campaign to control the creepers especially the three more aggressive one — the trumpet, devil’s ivy and merremia.

“Today the government is throwing a lot of money just to destroy alien invasive creepers in certain areas when they can encourage people to use it in craftsmanship,” said Breithaupt.

She said that: “If we teach people how to use it to make a craft, it could be another way to control its propagation.”

The chief executive of the Ministry of Environment, Flavien Joubert, said that it is quite encouraging to note that some people are creating art and finding an economic value with the creepers.

“There are combined ways in which we can eliminate creepers, using it as a form of art and adding economic value to it, can become another form of intervention as it will encourage more people to remove it from the environment voluntarily,” said Joubert.

There are other alien plants such as cinnamon and bamboo, which have economic value, and Joubert said that many artists are using them as a means of getting an income —  the same could apply to creepers.

Breithaupt said that other than mirrors, she can make other items such as baskets and lampshades, which are commonly seen in hotels.

“The texture of dry creepers is the same as rattan and bamboo, which is used to create raffia window. It is very flexible and malleable,” said the local craftsman.

Everything with the creepers can be used in the creation of art, Breithaupt said, “ including its roots and leaves.”

The products have different prizes and are on sale at the Camion Hall in the capital city of Victoria.

Looking towards the future, Breithaupt said that more attention should be given to artists and people with the right know-how should be appointed to key positions to give the industry a new breath of life.

“Our resource is our culture; we should stop importing raw materials that we have naturally in the environment,” she said.