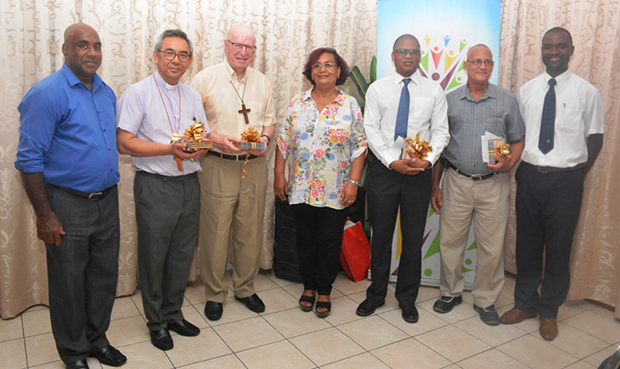 Four gospel songs recorded in Creole and released in a CD format has been released by the Seychelles Bible Society.

The CD will serve as another great tool in bringing the word of God to our people after the Creole bible was launched in October 2017.

The CD launch took place at the Ceps conference room and included an opening prayer by Pastor Abel Ntep Ntep, a scripture reading by Pricilla Payet and a brief history of the project by Raymonde Onezime.

Seychelles Bible Society chairperson Reverend Daniel Kallee presented four CDs to representatives of the four churches invited by the Society and they came from the Catholic, Anglican, Seventh Day Adventist and Pentecostal faiths.

On behalf of the Bible Society, Reverend Kallee dedicated this project and others still yet to come to the youth.

“It is our sincere hope that this project will be for the personal edification of the younger generation in Seychelles,” Reverend Kallee said.

On her part, Ms Onezime said the producers and their team comprised a group of young people from various Christian denominations on the island, and they set to work on this project with great devotion and commitment.

“Along the way they met many hurdles and challenges in the form of absences of certain participants who had to go abroad for various reasons, those who fell ill, breakdown of equipment and other misfortunes which hindered the progress of this project,” she said.

The CD costs R150 and copies are available at the Seychelles Bible Society bookshop at Huteau Lane Complex.

The audio CD of gospels from Mathew, Mark, Luke and John was launched last year when the translated Old Testament was released. The main producers were Alan and Françoise Ally.