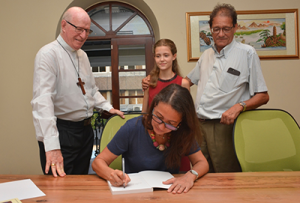 ‘Legal Metissage in a Micro-Jurisdiction: The Mixing of Common Law and Civilian Law in Seychelles’, is the title of a new book written by Dr Mathilda Twomey, Chief Justice of the Supreme Court.

The book was officially launched on Wednesday evening at the Mayor’s Office, ex-Carnegie, on State House Avenue.

Mrs Twomey said she has dedicated her book to her daughter Aoibhín (pronounced Eeveen, which in Irish means “little light”). Dr Twomey also had special words of acknowledgement for her other children who were present at the launch.

The ceremony, organised jointly with David Andre, the Mayor of Victoria, was held at a venue which Mrs Twomey said she purposely chose as the place has great significance since it was here, in her office when this building still housed the Court of Appeal, that she wrote the first lines of the first Chapter in 2012. 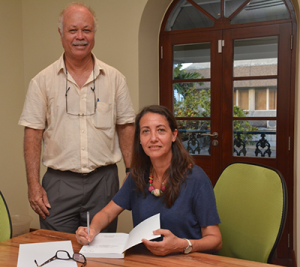 Also present at the ceremony were the Speaker of the National Assembly, Patrick Pillay; justices of appeal; judges of the Supreme Court, French ambassador Lionnel Majesté-Larrouy; members of the bar, Minister for Tourism, Civil Aviation, Ports and Marine Maurice Loustau-Lalanne; Professor Anthony Angelo from the Victoria University of Wellington, New Zealand, other dignitaries and family members consisting of children and siblings.

In a short address to kick start the launch ceremony, Mayor Andre expressed his appreciation to Dr Twomey for choosing this venue which he describes as a very fitting one.

“Fitting in the sense that this building was a national monument constructed in 1903 and was the first Government secretariat. And during the latter half of the twentieth century, it used to house the magistrate court, offices of the Victoria District Council, the Survey Department and the National Library. It was later turned into the National History Museum and finally housed the Court of Appeal,” said Mr Andre.

Professor Angelo described Dr Twomey’s book as a celebration of the laws of Seychelles and that not much has been written on that law. It is to be noted that ‘Legal Metissage in a Micro-Jurisdiction: The Mixing of Common Law and Civilian Law in Seychelles’, which has a Tahitian design, was printed in New Zealand. It costs R500 per copy available from Mrs Twomey’s personal assistant, Jemina Lucas.

“The writing of a book is also an introspective journey. I’d like to think that I became acquainted with myself, grew, matured and mellowed while writing it. I also gained perspectives into the Seychellois legal system that I failed to grasp as a young legal practitioner,” said Dr Twomey.

Dr Twomey then shared her love for this legal system which she said has enthralled her and which continues to bewitch her.

She said after the Seychelles became a fully-fledged colony in 1903, vigorous mixing of the laws of the common law and civil law traditions took place. Then the metissage started in earnest.

“The 1904 Penal Code was a patchwork of the previous French Code with importations from the British Indian Penal Code. It was to remain in force until 1955 when it was replaced by new Penal Code, this one an importation from Queensland, Australia via Nyasaland, the Gold Coast and East Africa. The Codes of Civil and Criminal Procedure were promulgated in 1919 and 1920 both sourced from England but with the retention of the procedural rules found in the French Civil Code apart from the law on domicile and the laws of defamation which were English imports.

“The hybridisation of our laws was perhaps a reflection of the hybridisation of our peoples. MT Reid the Financial Controller from Britain who visited Seychelles in 1933 records that the population had risen to 27,444. He states that the composition of the population could no longer be recorded because ‘it would be difficult to do so when there are so many of mixed blood making no claim to be pure white’. Of their identity he states ‘They are French in outlook, politically Seychellois first though British subjects as well. They resemble French people in many ways but a tropical environment has done its work… [producing] a disposition to feckless hedonism…”, explained Dr Twomey.

She added from this ‘Russian salad’ or ‘mongrel laws’ as the British administrators in 1954 referred to our laws, our legal system and our laws have been fashioned into what they are today and they retain for her an amazing mixité, a wondrous patchwork of laws from the old world and are truly unique.

Mentioning  Alexander Wood Renton, a judge first appointed to the Supreme Court of Mauritius and then Ceylon, was struck in the early twentieth century by the distinctiveness of the emerging tradition wrought by the layering of common law onto civil law in some colonies of the British Empire, Dr Twomey said he referred the laws of Seychelles “…a world of which no lawyer will ever be content to lose sight who has once entered it, seen its wealth, strength and beauty, and felt its abiding charm”.

Dr Twomey thanked all those who have helped her in the compilation of her book, notably the late Judge Andre Sauzier, whom she said was her mentor.