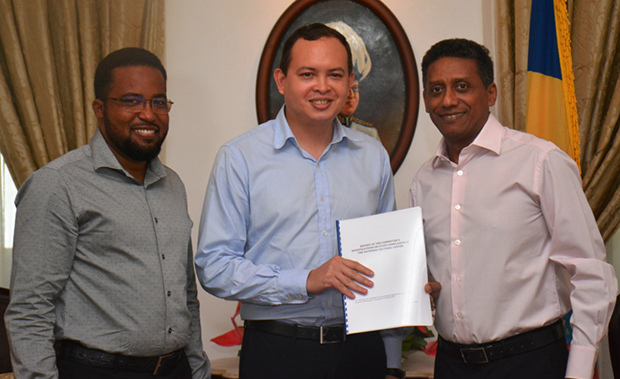 Workers to be paid compensation

People whose health has been affected by fungus emanating from the archives section within the National Cultural Centre will receive a compensation and remedial works will be done on the building.

These are two recommendations found in the report submitted by a committee set up by President Danny Faure to investigate the complaint.

The two other members ‒ Yvonia Richardson and Cecile de Commarmond ‒ were not present at State House yesterday.

The committee spent over four months gathering extensive information and held interview sessions with 110 members of both current and former staff of the National Cultural Centre building.

The report is a thorough investigation and it assessed staff complaints and claims for compensation. It also includes recommendations on remedial actions. These recommendations will be presented at the next Cabinet Meeting on Wednesday September 6, 2017. The report shall be made publicly available online thereafter.

Mr Sabino explained that although the appointment was made in mid-April, the committee only started its work in May.

“Initially we had been given a deadline of end of June to submit our report but we found in our initial meeting that the timeline was too tight and we needed to gather more information in order to do a thorough piece of work. Therefore we requested for an extension and were granted such. It enabled us to gather more information, interview 110 current and former staff of the National Cultural Centre.

Our recommendations are two-fold. Firstly, we have asked the president to look into some remedial actions as some of the problems at the National Cultural Centre will not just be resolved by payment of compensation. We are thus recommending that conditions improve within the building.

Secondly, we have recommended that certain workers at the National Cultural Centre should be paid compensation.

The infestation started in 2013 in the building which houses the national archives and library and several offices.

Measures were taken to rid the building of the fungus which has given staff members’ skin problems.

Ozone and UV light systems were installed to help control the bacteria in the area. A humidity regulator apparatus was introduced and a general cleaning was done.

The bacteria re-appeared in 2016 and again affected the staff, some of whom developed chronic skin problems, forcing some to take sick leave.

Dr Bibi said results of tests prove that the building was infected with fungus and mold and that many workers were suffering from the same symptoms.

“These people don’t live together. They work together and the problem must be in their work place. It is not that they only want some kind of compensation. Their issue is genuine. More than 50 people suffering from respiratory problem and itching reported to private and public clinics for consultation. This means there is a relation between the work environment and the health issues they have experienced,” said Dr Bibi.

He also added that the report they have handed to President Faure contains literature from universities about the adverse effects on people’s health as a result of being exposed to molds in the workplaces and homes.