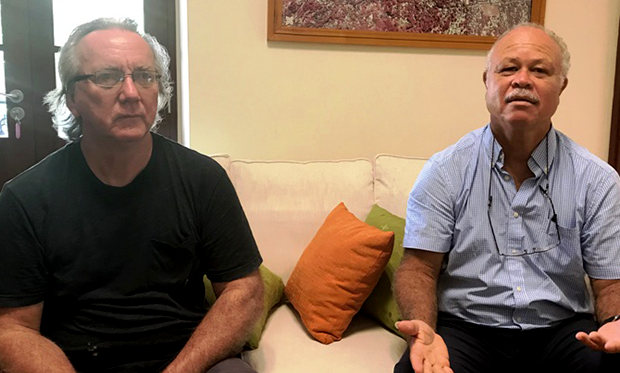 A patriotic musical composition evoking and eulogising the history, traditions, environment and unity of the Seychellois people, Koste Seselwa was recognised by our nation’s government as the official national song, or the national anthem of the Third Republic in 1996.

The end product of a joint effort between well-known musicians David André, now the Mayor of Victoria, and Georges Payet still sounds new to them whenever they both hear it.

A combination of their initial entries for the competition launched to create new national symbols for the Third Republic, Koste Seselwa was written in a single day, according to Mr Payet.

They were approached, along with a third individual, Antoine Azemia, by the organising committee who suggested that they work together and come up with something new, as their initial submission each contained something they were looking for.

After Mr Azemia decided to back out, the duo settled in an old house at La Plaine St André where they worked in harmony, pasting bits and pieces, before coming up with the final result.

Mr André said they were so committed and wanted to produce something good for the country that they spent a lot of time preparing individually, before starting the joint work session.

Russian orchestra expert and band conductor Anatoli Savatinov then worked on the arrangement.

Koste Seselwa was recorded for the first time by the l‘orchestre de la Garde républicaine in Paris, where Mr André had the chance to attend and witness the event.

They both agreed that each line of the national anthem is from very deep within them and there is always a sense of pride and belonging each time they hear it.

Mr Payet even added that Koste Seselwa can be used as a guide on how to better grow as a nation, as it covers all the aspects and illustrates all the good qualities one should have in order to succeed as a committed citizen.

“Whenever I achieve something good in any aspect of life, I always feel like I am raising the country’s flag, as mentioned in the national anthem,” he further added.

They both concluded by agreeing that Koste Seselwa is a call for unity among the whole nation, regardless of our personal opinion or agenda.

Seychelles, our only motherland

Where we live in harmony

We give thanks to God.

Preserve the beauty of our country

The riches of our oceans

For the happiness of our children.

Together for all eternity

Join together all Seychellois.