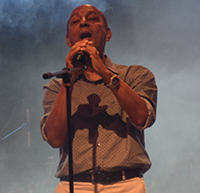 That was the impression of many members of a good audience that attended a gospel show last Saturday during which Ally released his latest album entitled: “Let everything that breath praise the lord”.

The launch took place at the International Conference Centre, where the Christian singer performed with other local stars of Christ.

With the crowds romping along, each performer offered his best numbers “for the glory of God”.

The singer was happy to trace his walk with Jesus with Seychelles NATION, saying he became a born-again Christian on December 17, 1993. He explained the transition by saying it entails “repenting and dedicating one’s life to Christ in accordance to John 3:3”.

“Exactly one year later, that was on December 17, 1994 I married my lovely wife and we welcomed our beautiful daughter, Elsha, in the year 2000.

Brother Jean – as he is more commonly known by his friends and fellow believers – has been a member of the Pentecostal Assembly of Seychelles since his conversion, to date. He is an active member and is the worship leader of the church’s praise and worship ministry.

Over the years he has taken part in various activities both locally and internationally, having attended conferences and other spiritual events.

This has given him chances to visit Mauritius, Reunion Island, France, Switzerland, England and Germany among other nations.

His first gospel album called “The Blessing of God” was released in 2003, with the second one entitled “The Glory of God” following soon after, paving the way for “The Fruit of the Spirit”.

Copies available at that time of his latest album, “Let Everything that Breath Praise the Lord,” were sold out Saturday during the concert but more are now on sale.

Bro Jean has won the coveted trophy called “Shekinah Gospel Music Award” in 2015 which was presented to him by the Everlasting Love Ministry during a recent Bring It On gospel talent show.

Like father like daughter, Elsha is also following in her dad’s footsteps and recently sang the title: “En tan pour tou” (A Time for Everything), which she performed in a duet with her father during the Saturday concert.

Asked to comment after the star-studded show, a believer said, “by God’s grace, the future of gospel music in Seychelles is quite promising”!

Beguitta Marie was at the show and took the pictures published here.