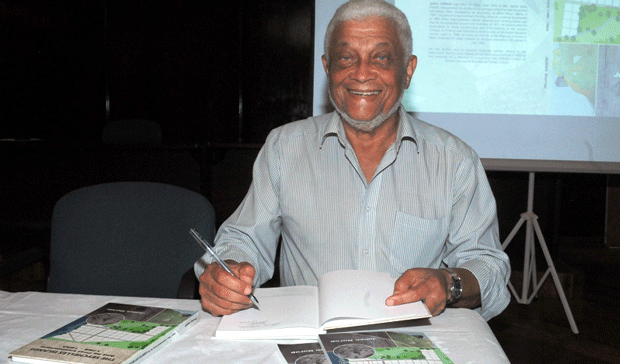 The book which the author says took between two to three years to write was officially launched in a short ceremony at the National Cultural Centre on Thursday afternoon.

The Seychellois historian commented that the launch of a book is like the birth of a child and a book, good or bad, will always contribute to changing humanity. It was in this spirit that he presented copies to the National Library. The donation was accepted by the principal secretary for Culture Benjamine Rose.

Mr Durup has added that he wrote the book because of a lack of history books in Seychelles, a situation which he says makes that we do not know our history. He therefore hopes the new publication will be used by students in schools and also by professionals as a reference document.

The writer has been thankful to Seychellois predecessors who he says have inspired him. Those include Antoine Abel, Guy Morel and Kantilal Jivan Shah. He was also grateful to Marc Hoareau of Victoria Computer Services (VCS) and Tourism and Culture Minister Alain St Ange for their support.

The latter has on his side described the book as a worthwhile project for Seychelles which marks where we are today as Seychellois.

“You have documented history and it will stay there. The book is an era of the country when we saw a lot of development which has brought us where we are today. If we are now proud to be a melting pot of nations, we had to have settlements and settlers,” Minister St Ange remarked.

Mr Durup has separated his work in eight chapters were he presents an insight on the following sub-topics:  The early visitors to Seychelles which included Arabs, Chinese, Portuguese and French; settlement to the islands; Seychelles’ first Constitution which was based on nature conservation; the country’s laws; its respective currencies; economic and commercial activities; land owners and properties; as well as the Creole language and its vocabulary.

On this last subject, the author states that in many cases we do not know the origins of Creole words.

“It is in our language that we understand where we come from,” states Mr Durup, himself a former director of Seychelles’ Archives.

The book which has necessitated extended research from archives in Seychelles, Mauritius, Reunion as well as Aix en Province in France, is on sale at R350 (hardback) and R225 (softback) at the Antigone bookshop in Victoria as well as at the airport.

Mr Durup says he is currently working on another book, this time on the laws of Seychelles.

2016-05-09
Georges
Previous: Delplace hosts the Miss Seychelles contestants
Next: Six amazing things to do in Seychelles