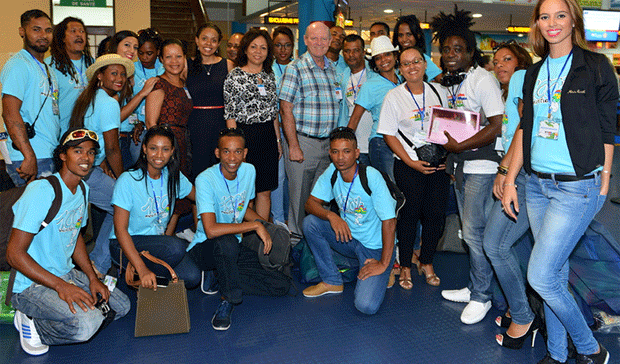 A 22-member delegation from Mauritius landed in Seychelles late Monday afternoon on board an Air Seychelles flight, four days before the much-awaited Carnaval International de Victoria.

Mauritius is among the many countries that will be joining in the celebrations of the fifth anniversary of this event dubbed as the carnival of carnivals.

The Minister for Tourism and Culture Alain St.Ange was present at the Seychelles International Airport to welcome this delegation from the neighbouring island of the Indian Ocean.

He was joined by the principal secretary for tourism Anne Lafortune and that of culture Benjamine Rose along with the chief executive of the Seychelles Tourism Board Sherin Naiken to welcome the Mauritians.

It is the second time that Mauritius comes to Seychelles for the Carnaval International de Victoria. In 2013, Mauritius won second prize as best international float.

The Mauritius Tourism Promotion Authority is being represented by this delegation in the upcoming carnival to be held this weekend. Known Sega performer Toto Lebrasse is part of the delegation from Mauritius. Later this week H.E. Xavier Duval, the Deputy Prime Minister of Mauritius is expected to also travel to the Seychelles where he will be Guest of Honour at this 2015 edition of the Carnaval International de Victoria. Minister Alain St.Ange said at the airport that he was happy to see Mauritius arrive for this 5th Anniversary event of the Carnival listed on the Vanilla Islands Calendar of Events.

2015-04-21
Georges
Previous: World Book and Copyright Day 2015
Next: SWEDEN IS SET TO BE FLYING ITS FLAG AT THE CARNIVAL IN SEYCHELLES AS SAMI TRIBE PERFORMER KATARINA BARRUK LANDS IN SEYCHELLES