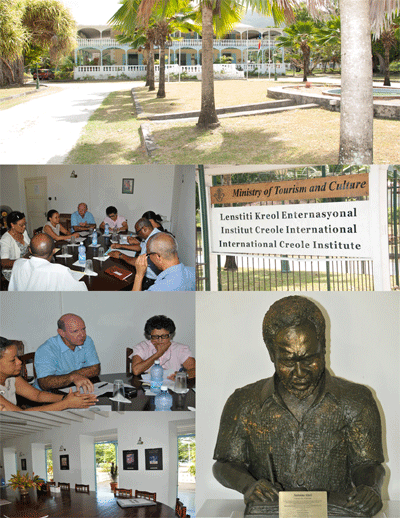 Top- The International Creole Institute situated in Au Cap is one of Seychelles’ most historical landmarks. Middle Left- The Minister of Tourism and Culture, Alain St Ange addressing the executive board members during last week’s meeting. Middle Right- The large building sign that cannot go unnoticed when passing by the Au Cap coast. Bottom Left- Inside the International Creole Institute. Bottom Right- The bust of Antoine Abel, renowned Creole author, is the first of a series of busts that will be displayed at the institute to celebrate all the special individuals who have in one way or another contributed to the literature, culture and history of Seychelles.

The Creole Institute of Seychelles, situated in Au Cap is usually visited by several tourists with a thirst for culture, researchers and those who appreciate Creole literature. However last week, the institute received a special visitor at its doorstep that being the Minister of Tourism and Culture, Alain St.Ange who was accompanied by the Principal Secretary (PS) for Culture, Benjamine Rose. They were both welcomed by the chief executive officer of the International Creole Institute, Penda Choppy.

The Minister’s main purpose of visit was to meet the newly appointed chairperson of the Creole Institute,Dr Marie-Reine Hoareau, who was about to chair her very first board meeting that day. Minister St.Ange also took the opportunity to meet with the other executive board members, namely Marcel Rosalie, Patrick Mathiot, Dr Justin Valentin and Marguerite Mancienne, and sit for the meeting. Many important topics were brought up however the ones which were discussed at length included seeking further funds for the maintenance and running of the institute, structure of human resources and the possibility of introducing certain services which are currently in demand such as translations, publications and a digital library, to name but a few.

“I agree that our mandate is not restricted to only preserving the language but also everything that has to do with culture,” stated Dr Hoareau as she suggested that the executive board members, who are also currently sitting on other cultural related boards, should use their roles to create an intercommunication channel with other organisations as a means to keep updated with the recent activities and achievements occurring in the field of preserving Seychelles’ heritage.

As the meeting was coming to an end, Dr Hoareau expressed her gratitude to Minister St.Ange and Miss Rose for attending the meeting and providing valuable suggestions. This, she said, was a clear sign that the Ministry of Tourism and Culture has the Creole Institute at heart and values its board members.

For his part, Minister St.Ange stated that it was highly important for both, the PS for Culture and himself to be present for this first Board Meeting under the new chair of the Board. “It was an opportunity to welcome Dr Hoareau and to wish her and the Board success in their mandate. We remain realistic that their responsibility is key to us as a Country, and for us as a people to better appreciate our Creole and in so doing our Culture” said Minister Alain St.Ange as he left the Institute.