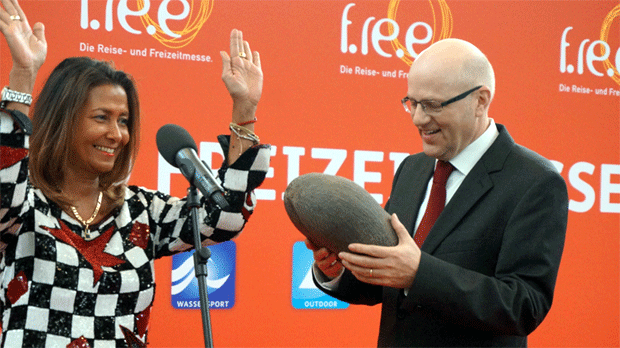 Munich, Germany, February 2016. — When f.re.e, the annual consumer travel show in Munich, closed on Valentine’s Day after a five-day run, visitors, organizers, and representatives of the Seychelles, this year’s official “partner country,” were all smiles: The fair had been an overwhelming success for everybody concerned.

The popular fair at the start of the vacation planning season, now in its 47th year, is the leading travel and leisure fair in Germany’s largest and most affluent state, Bavaria, located in the Southeastern part of the country and bordering on Austria. With about 1,200 exhibitors from 60 countries, it attracted a record 122,000 consumers this year, from mid-week into the weekend. For the third year in a row, the Seychelles enjoyed special “partner country” status at a major tourism fair in Germany. 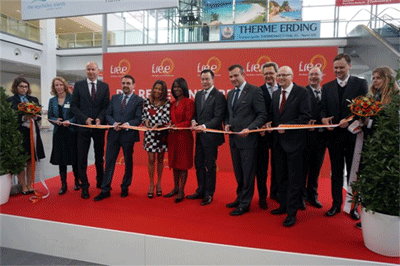 The fair itself was preceded by an off-site press conference on Friday, the 5th of February, at a popular Munich restaurant, attended by numerous journalists anxious to know more about the “exotic” partner country — the first long-haul destination in the fair’s history to enjoy this status.

On opening day, Wednesday, the 10th, the Seychelles delegation took part in the official opening ceremony with ribbon cutting and a tour of the fair. Joining Ms. Bernadette Willemin, STB’s Director for Europe and head of the delegation, were Ms. Edith Hunzinger, Manager of the Seychelles Tourism Board Office in Germany; and Ms. Natacha Servina, Marketing Executive from STB headquarters, and Max Hunzinger, Honorary Consul for the Seychelles. On the host’s side, the Seychelles stand was visited by Mr. Joachim Herrmann, Minister of the Interior of the Free State of Bavaria; Mr. Franz Josef Pschierer, State Secretary in the Bavarian Ministry of Economics and Media, Energy and Technology; and Mr. Klaus Holetschek, Member of the State Parliament. Minister Herrmann (pictured on the left with Ms. Hunzinger, left, and Ms. Willemin, right) received a coco de mer on behalf of the State of Bavaria, as did Mr. Reinhard Pfeiffer, Vice-Chairman of the Board of Messe München, the show’s organizer, while Mr. Holetschek was given a commemorative set of Takamaka Bay rum.

Throughout the fair, dancers and singers of Latroup Nasyonal entertained visitors with multiple daily performances on various stages, while artists Mssrs. James Agricole and Egbert Marday gave curious audiences a vivid visual impression of their home country by painting typical Seychelles scenes and landscapes at the stand and selling their works to appreciative customers. At the same time, Seychelles destination videos and presentations were conducted at various times in a room called “Holiday Cinema,” while STB representatives and trade partners appeared on various stage to give interviews and participate in panel discussions.

On Thursday evening, 68 travel agents, mostly from the Southern part of Germany, attended a Seychelles workshop hosted by the Seychelles Tourism Board and all the trade partners present at the stand. The agents received up-to-date information and were given ample opportunity to ask questions.

The fair and the Seychelles as a featured destination in particular were widely covered in local and national media, including television, radio, and social media. On the first day of the fair, the Seychelles stand hosted BayernWelle radio station for their live broadcasts from the event. The fair is likely to give another boost to the already excellent stream of visitors who find their way from Germany to the Seychelles, year after year, contributing about 13% to the visitor total.

In a survey conducted at the fair, 96 percent of the visitors gave f.re.e a positive rating. Mr. Pfeiffer was more than satisfied about the turnout: “We are extremely pleased about the excellent visitor figures, and it is just as nice that there was even more booking and buying this year.” The latter was confirmed by Mr. Cuccurano, who was thrilled to get numerous confirmed bookings for the coming months: “This exceeded my wildest expectations.” Mr. Behari and Mr. Savy praised the direct contact with potential guests: “People were very interested in what we had to offer.” The other co-exhibitors also welcomed the opportunity to present their product to a curious clientele. And Ms. Barone pointed out that there was a number of new clients who were just discovering the Seychelles as a sailing destination: “This gives us great hope for the future.”

Edith Hunzinger summed it up at the end of the fair: “For us, as a destination, our first participation at this fair, after an absence of several years, was a resounding success. Visitors were fascinated by the variety of holiday options we had to offer, but also by the daily performances of our artists and dancers who brought the Seychelles to Munich for five days. We will certainly return next year.”