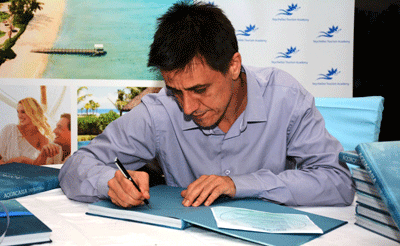 A new cookbook named Aquacasi was officially launched last Friday during a cocktail held at the Seychelles Tourism Academy at La Misère.

It was signed and presented by Shanti Maurice executive chef Willibad Reinbacher to Alain St Ange, Seychelles’ Minister for Tourism and Culture.

Aquacasia, through executive chef Reinbacher, is the product of a partnership between Shanti Maurice, a Nira Resort, the Seychelles Ministry of Tourism and Culture and the Seychelles Tourism Academy (STA).

It has been described as the jewels of the Indian Ocean and is a culinary tribute to food developed by local island cultures of the Seychelles, Comoros, Madagascar, Mauritius, Sri Lanka, Reunion, Indonesia and Western Australia.

It brings together each island’s love of food, the culinary art of the people and an understanding of where it all started.

Other guests present at the launch ceremony were Deepak Balgobin, director of human resources and external affairs of Shanti Maurice; Flavien Joubert, the principal of the STA; among other dignitaries.

In an introductory remark, Mr Joubert said Shanti Maurice and the STA signed a memorandum of understanding (MoU) about five years ago and since then a lot of projects have been undertaken between the two parties.

After an STA delegation visit to Shanti Maurice, the cookbook project came about hence the launch in Seychelles.

“It is always a fitting time when a group of people sit together to get a book edited and more so to put out the flavours of different countries together,” said Minister St Ange. 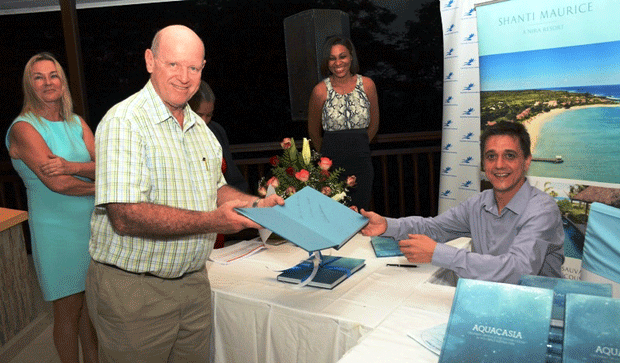 He said the book was adopted as such after a unanimous decision and will be distributed across all the Vanilla islands.

The minister also had words of thanks for Shanti for the partnership with STA, which he said has made great leaps forward.

As for Mr Balgobin, he said in the Indian Ocean islands, relationships and bonding are valued, as well as cultures and the local community.

“This book is a symbol that we need to give back something to the community, to the islands. This was being done through the islands’ food, culinary arts and the people,” he said.

Chef Reinbacher said the idea for such a book came a few years ago and since then the production has been a journey of discovery.

He said it has been a great achievement as the book has been talked about on European TV which is watched by millions of viewers.

The evening also saw a video on the book and all distinguished invitees got a copy afterwards.

A new consignment of this book is on the way and STA will inform the public where they will be available for sale later on.