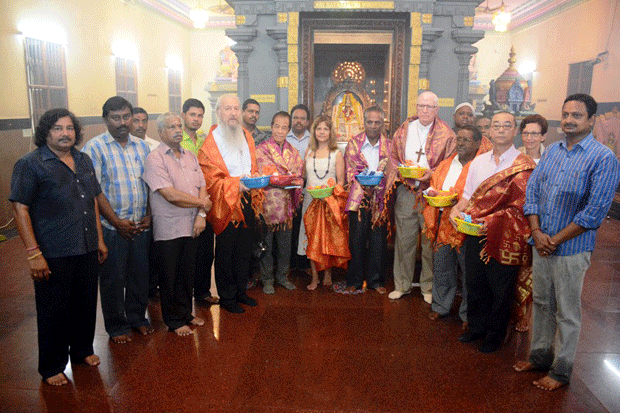 Members of the Seychelles Interfaith Council (Sifco) on Tuesday visited the Sri Navasakthi Vinayagar Hindu temple on Quincy Street to learn more about the history, beliefs and practices of this ancient religion.

The visit formed part of activities organised by Sifco to mark the Interfaith Harmony Week which is celebrated from February 1-7.

Its aims are to promote dialogue, understanding and mutual respect between the different religions.

During this week, declared by the United Nations in 2012, hundreds of interfaith associations around the world organise activities aimed at bringing about greater unity among people of different beliefs, opinions and practices.

Some hold spiritual gatherings and talks from different religious leaders to create deeper awareness of the beliefs of others.

Some undertake a social or environmental project involving followers of different faiths.

This shows that whatever religion you belong to, all are trying to work towards a  more loving, prosperous and peaceful society.

During their visit to the temple, Sifco members were warmly welcomed by traditional music and honoured by the executive members of the Seychelles Hindu Kovil Sangam (SHKS) in a short ceremony where they received shawls and memento of the temple.

The vice-chairman of the SHKS, Kandan Pillay, explained the history of the temple from its humble beginnings in the 1970s in Seychelles and the cultural activities of their religion.

Today pujas (prayers) are held four times daily and festivals are celebrated both at family level and at the temple.

At the highest point of the temple, different grains are kept sealed and renewed every 12 years in case of natural disasters and famine.

There are three full-time priests in colourful traditional dress who conduct the religious ceremonies.

Many visitors including tourists visit this temple daily and visitors are welcome to enter and pay their respects, provided no statue is touched.

The inner sanctuary however is out of bounds to all except the priests.

The members of Sifco were very thankful to the association for the trouble they took to receive them and were happy to learn that the SHKS is interested in becoming a member of Sifco.

The chairman of Sifco, Bishop Denis Wiehe of the Roman Catholic Church, said: “We have taken it upon ourselves to visit the Hindu temple here so that we can know more about this place of worship because our group is open to all different faiths. The basic belief that we have is that each person has the right to choose his religion and his philosophy in life and that we must respect each other.”

“We try to promote in our society a greater understanding, greater peace and greater love among the different people of different faiths and other beliefs,” he added.

The visit to the temple was organised by Sifco member Thattil Devassy Joseph.