S.KOREAN ROYAL DANCE AND UNESCO HERITAGE DANCE AT THE CARNAVAL IN SEYCHELLES 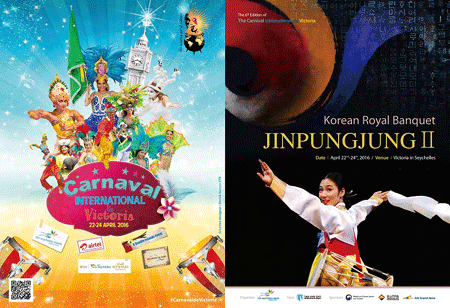 South Korea, the country with 4,300 years history, will join the 6th edition of Carnaval International de Victoria in the Seychelles. South Korea have confirmed that they will be using this coming carnival to showcase their Korean traditional royal dance and traditional group dance listed as Intangible Heritage of Mankind by the UNESCO.

At the OPENING CEREMONY of the Carnival on Friday the 22 April, the South Korean delegation will perform the Korean traditional queen’s dance. “Jinpungjeong(進豊呈)” is the name of royal banquet usually arranged on national auspicious events. It is rather an official and ceremonial feast and usually bigger in scale than “Jinyeon (進宴)”. Thus the “Jinpungjeong(進豊呈)II “was selected to celebrate the “Carnival International de Victoria 2016” to be held in the Republic of Seychelles, likewise it had been in the palace of previous Kingdom in Korea. The combination of traditional beauty, elegance, and dynamism of the performance of “Jinpungjeong(進豊呈)” II will be accompanied by the “Taepyeongmu”, the solo dance of the ‘Queen’ of the old kingdom expressing her wish for peaceful reign.

For the Carnival parade session the South Korean delegation will showcase “Ganggangsullae”, which is currently the one of the “Intangible Cultural Heritages of Mankind” designated by UNESCO and prepared to pray for the affluence of the country. The exhilarating “Sogomu” will also be performed in the open air.

South Korean team, TAE HYE SYN KARMAFREE DANCE COMPANY, inherits and develops Korean traditional dance, but also the revitalization of Korean creative dances through the reinterpretation of its traditional dance movement and the creation of a new dance image. For the Carnaval International de Victoria, a 14 member delegation from South Korea is to visit Seychelles.

Alain St. Ange, the Seychelles Minister for Tourism and Culture noted “S. Korea and Seychelles have developed friendship and bond through various cooperation and exchanges. Through the platform of the Carnaval International de Victoria, I expect bilateral exchanges in tourism and understandings of each other’s culture will be further strengthened.”