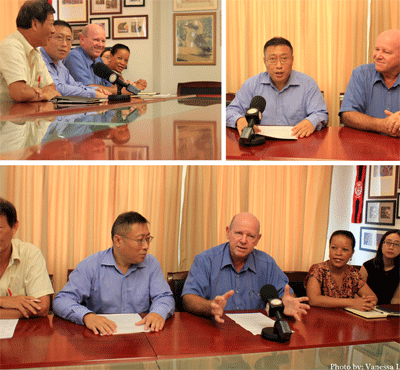 February 4 to 6 are the dates chosen to celebrate the Seychelles-China Day this year. The dates were officially announced this week during a press conference held at the ESPACE building offices of the Minister for Tourism and Culture Alain St.Ange.

The Seychelles-China Day Celebrations is a three-day festival which celebrates the Chinese origins of Seychelles and the bonds that today exists between the two countries.

During the press conference which was attended by Minister St.Ange, the Chinese chargé d’affaires Zhang Xiagyang, the principal secretary for culture Benjamine Rose and the chairperson of the Seychelles Chinese Association Charlie Ng Ping Cheun, the programme for the third Seychelles-China Day Celebrations was revealed.

Speaking to members of the local press, Minister St.Ange said Seychelles prides itself to once again be able to hosts such a great event which not only celebrates the ties we have with China but also recognises the historical links.

“China is one of the five historical branches that has helped in making us what we are are today, the Seychellois Nation. It is therefore fitting to have such a celebration in Seychelles,” Minister St.Ange said.

Minister St.Ange saluted the Chinese Embassy and the Chinese Association of Seychelles for being able to continue to bring the local Chinese community together.

He added that since Seychelles and China will celebrate an important anniversary of the years of the existing cooperation in June, the Seychelles-China Day celebrations will set the tone for the upcoming event later this year.

Mr Zhang said the Seychelles-China Day Celebrations will coincide with the Chinese New Year which falls on February 8.

He added that this, which is also known as the Spring Festival, is the most vital and the biggest festival in China.

The festival is not only celebrated in China but in many countries across the world, he added.

Mr Zhang said the Seychelles-China Day Celebrations is important as it not only promote exchanges between the two countries, but it also gives the people of Seychelles the chance to enjoy the Chinese culture in all its aspects.

Also speaking was Mr Ng, the Chairperson of the Chinese Association who said the event is not just for the local Chinese community but for the Seychelles as a whole.

The official launch of the three-day event will be on February 4, and is set to be an colourful event with great performances by the Seychelles’ School of Dance and one of China’s most famous art troupes, the Shanxi Group.

After the official launch of the 2016 Seychelles China Day Celebrations other activities will include a show by the Shanxi Group at the International Conference Centre on the second day of the festival at 6pm and a bazaar at the National Cultural Centre on the last day whereby members of the public will be able to buy Chinese food, jewellery, clothing and a variety of handicraft items from China.

2016-01-25
Georges
Previous: NEW MAP & GUIDE OF THE SEYCHELLES DELIVERS ULTIMATE TOURIST EXPERIENCE
Next: Tourism Ministers gather in Madrid for High Level Meeting on Tourism and Security – Minister Alain St.Ange of the Seychelles speaks of need to work with the press to defend ‘Right to Life’ and ‘Right to Economic Survival’.