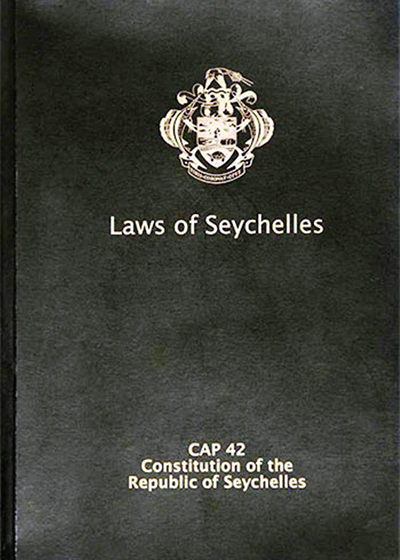 Monday June 18 marks 25 years since Seychelles got its new Constitution in 1993, signaling the birth to the Third Republic.

The country got its new flag and national anthem three years later (in 1996) to cap the Third Republic. That year, the people of Seychelles unfurled the five-colour national flag – the BLUE, YELLOW, RED, WHITE and GREEN symbol – and for the first time, Koste Seselwa, the new national anthem was played.

The changing of the flag and the anthem were events of great significance for the people of Seychelles as the country forged ahead with a greater sense of unity, nationhood and maturity.

Beginning end 1991, Seychelles underwent big changes politically. The island began the transition from a single-party to a multi-party political system the year after. There were a series of popular events including referendum and national debates which culminated in the adoption of the new constitution in June 1993.

In January 1993, representatives of the Seychelles People’s Progressive Front, the Democratic Party (the two parties enjoying between them the support of over 90% of the electorate), other smaller parties, religious denominations and organisations openly debated the new Constitution. Involvement, through the representatives, was near 100%.

Our Constitution, therefore, genuinely reflects the wishes of our citizens on how their nation is organised. Almost three quarters (73.9%) of our population overwhelmingly approved the new Constitution on June 18, 1993. The day was first observed as the country’s National Day until 2015 when it was changed to Constitution Day.

In the preamble of our Constitution, the founders of the Third Republic recognise the need for national stability; reaffirm the rights of the individual to life, liberty and the pursuit of happiness; and are proud that as descendants of different races we have learnt to live together as one nation and can serve as an example for a harmonious multi-racial society.

We, the people of Seychelles, the preamble reminds us, are grateful to Almighty God that we inhabit one of the most beautiful countries in the world.

We are mindful of the uniqueness and fragility of Seychelles, says another line in the preamble. The Seychellois people also take note of the national stability and political maturity they have attained despite the pressures of a sadly divided world.

The inherent dignity and the equal and inalienable rights of all members of the human family as the foundation for freedom, justice, welfare, fraternity, peace and unity, are recognised. It is reaffirmed that these rights include the rights of the individual to life, liberty and the pursuit of happiness free from all types of discrimination.

The people of Seychelles, continues the preamble of our supreme law, solemnly declare our unswaying commitment to maintain Seychelles as an independent State, both politically and economically, and to safeguard our republic’s sovereignty and territorial integrity. We uphold the rule of the law based on the recognition of the fundamental human rights and freedoms enshrined in the Constitution and in respect for the equality and dignity of human beings.

We are also committed to help preserve a safe, healthy and functioning environment for ourselves and for posterity.

These are the commitments we are to reaffirm as we rally around the new symbols.

The two main delegations of the Constitutional Commission were the Seychelles People’s Progressive Front (SPPF) and the Democratic Party (DP).

Seychelles gained its independence from Britain in 1976 after 226 years as a colony. The years from 1977 to 1993 were a period of field-leveling with a government determined to correct the economic and social injustices which had existed among the population. The same government of the second Republic, headed by President France Albert Rene, was re-elected the first administration of the Third Republic to continue with its socio-economic programme.

However, the transition was incomplete without the new flag and national anthem. The inauguration of the symbols put the finishing touches to the Third Republic.

Koste Seselwa, the National Flag, the Presidential Standard and the Armorial Bearings were finally approved by the National Symbols Committee, the National Assembly and the government.

At the start of the debates in the National Assembly to approve the final choice of the flag, the MNAs and National Symbols Committee chairman Joseph Belmont called for unity in choosing the symbols. They called for a flag that would foster unity and allow the country to continue along the road of progress. Of 27 MNAs present at the Assembly sitting, 25 voted for the flag design submitted by artist Philip Uzice.

The symbols inaugurated on June 18, 1996, are for all Seychellois and we should all be proud of them and respect them, said former Vice-President Joseph Belmont who was a minister at the time.

The National Anthem is the result of a combination of three submissions which most impressed the National Symbols Committee. Well-known musicians David Andre, Antoine Azemia and George Payet together worked on the final version of Koste Seselwa (Unite All Seychellois) and have been congratulated for their contribution. The anthem asks all Seychellois to unite. It thanks God for our homeland, the Seychelles, where we live in harmony, joy love and peace.

Our anthem asks us to preserve the beauty of our country and the wealth of our ocean. These are both precious heritages for the future of our children.

“Let us stay in unity always under the colours of our new flag, and together for eternity. Let us hold hands,” says the anthem.

2018-06-19
Georges
Previous: ‘It still feels like a new song whenever we hear the national anthem’
Next: The man behind the Seychelles flag