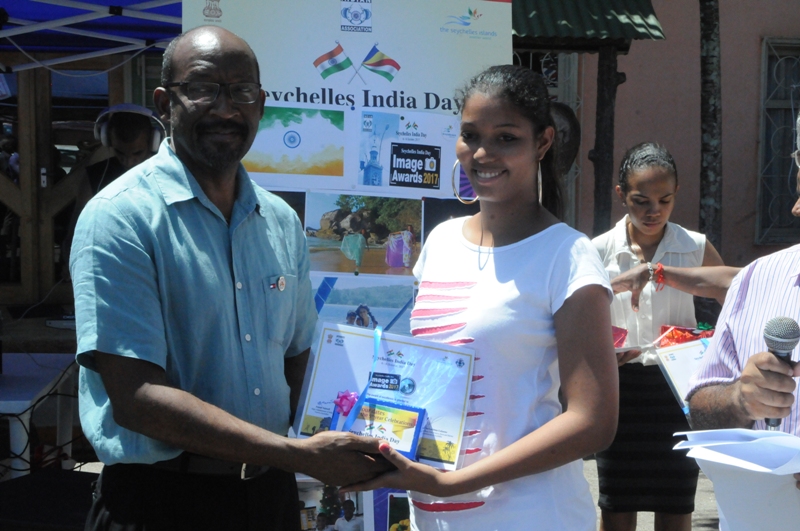 A food and fun fair which forms part of activities organised for this year’s Seychelles-India Day celebrations was officially opened yesterday at the Stad Popiler car park.

It was the chairman of the Seychelles-India Day organising committee, Ramu Pillay, who launched the event in the presence of Vice-President Vincent Meriton, who was the guest of honour, other members of the committee, and representatives of those contributing towards the fair.

According to the organisers this year’s food and fun fair is more fully-fledged than the one last year as they have added more food items and a greater number of stores.

Musical entertainment, face painting and bouncing castle for kids, are also on the programme.

During the launch ceremony winners of a photography competition which also forms part of the celebrations received their prizes.

Out of a total of 53 photographs submitted, only four were selected for the final prizes which also included certificates, presented by Vice-President Meriton.

This year’s Seychelles-India Day, which is being celebrated under the theme ‘Celebrating the friendship of two cultures’, comprises several activities related to people, food music, dance, sports and culture all depicting the bilateral cooperation between India and Seychelles. It ends tomorrow with a gala lunch at the Berjaya Beau Vallon Bay hotel.

“I thank and welcome you Vice-President Meriton for helping us in the event by making it a success as you do every year. Without the vice-president we cannot organise Seychelles-India Day,” said Ramu Pillay in his short opening address for the occasion.

“With the support from someone in the high office, we can do a lot,” added Mr Pillay.

Apart from food and drink stalls, there were also stalls selling household upholstery like rugs, bed sheets, towels to name some.