Breaking News
Home - news - Seychelles’ Minister for Tourism, Civil Aviation, Ports and Marine Alain St.Ange appeared before the Seychelles’ National Assembly this afternoon to answer a ‘Private Notice Question’ in relation to the proposed redevelopment of the international airport located at Pointe Larue.

Seychelles’ Minister for Tourism, Civil Aviation, Ports and Marine Alain St.Ange appeared before the Seychelles’ National Assembly this afternoon to answer a ‘Private Notice Question’ in relation to the proposed redevelopment of the international airport located at Pointe Larue. 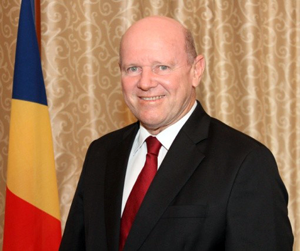 The PNQ question tabled by the leader of the opposition in the assembly, Wavel Ramkalawan, was seeking clarification on the agreement that Seychelles signed with Abu Dhabi Airports company last month for the redevelopment of the Seychelles’ international airport.

Firstly, Mr Ramkalawan wanted to know what new infrastructures are being proposed under the proposed redevelopment project, secondly reasons as to why the Abu Dhabi Airports company has received the contract and if there was any tender procedures involved for the project and lastly what benefits the company will reap for its investment in the project.

Minister St.Ange started his statement by saying the tourism industry of Seychelles and the tourism private sector, the Car Hire Companies, the Taxi Operators, the DMCs and the Seychellois public as a whole have been asking for the Seychelles International Airport to be redeveloped and become more modernized.

“Taxi and car hire operators have all made this call. This has been a call from the tourism private sector trade ever since I was working in the industry and even while I was an elected member of the opposition,” Minister St.Ange said.

“The redevelopment of the Seychelles’ international airport is long overdue, this is clear”, Minister St.Ange added.

The new appointed Minister for Tourism, Civil Aviation, Ports and marine remarked that immediately after the singing of this agreement on October 11 by his predecessor Minister Joel Morgan, this made the news. “This was since the 11th of October” the Minister said.

Minister St.Ange said the masterplan of the airport was approved as a concept in 1999 by the cabinet of ministers, and the board of Air Seychelles at that time knew of this development.

“Today with the new cabinet of ministers, and today is only my second day in office as the minister responsible for civil aviation, and it is important to state again that the responsibility of the infrastructure in the country including the redevelopment of the airport is not under my portfolio.”

“This is clear as there is a ministry responsible for this and this is the Ministry of Habitat, Infrastructure and Land Transport headed Minister Charles Bastienne,” the Minister added.

“But it is important for the people of Seychelles to get the correct answers following the questions asked and of the intended redevelopment of our airport. My answers are based on the documents provided by SCAA and the department of civil aviation, ports and marine.”

“The project being proposed under the new development is the construction of a new terminal situated north of the existing terminal” the Minister said.

To answer Mr Ramkalawan’s question on the contract being signed between Seychelles and the Abu Dhabi airports company, Minister St.Ange said there was no contract signed, instead a memorandum of understanding (MoU) has been signed to study a project that has been on the cards since 1999 with interest then by Singapore specialists in aviation.

Minister St.Ange said when there is a contract we will see the direct benefits that this will bring but since then no contract has been signed.

Purpose of this non-binding MoU is to establish a framework for the parties to discuss the preparations and the potential negotiation of one or more definitive agreement regarding the project, Minister St.Ange said, citing part of the MoU.

He said the MoU was brought before the cabinet of ministers which gave its approval. Minister St.Ange said he agrees with the leader of government business in the National Assembly Charles de Commarmond to have the contract if there will be one to be signed or another MoU before it becomes a contract presented to the parliament for discussion and approval. The Minister reiterated over and over again in his deliberations that the document in question is but a non-binding MOU and not a contract as has been referred to.

Minister St.Ange was accompanied by the principal secretary for aviation Garry Albert and the chief executive of the Seychelles Civil Aviation Authority Gilbert Faure

2016-11-03
Georges
Previous: Seychelles’ Minister for Tourism, Civil Aviation, Ports and Marine Alain St.Ange appeared before the Seychelles’ National Assembly this afternoon to answer a ‘Private Notice Question’ in relation to the proposed redevelopment of the international airport located at Pointe Larue.
Next: SriLankan Airlines makes inaugural flight to Seychelles