If you were passing by the Park Rotana Hotel Abu Dhabi on May 26th, 2016 at about 8.45pm you would probably think that you were in another world as the only sounds to be heard then were those of Seychelles traditional music.  What was going on, you might well ask? If you were curious enough to find out, you would enter the ballroom where the strains of music were coming from, and you would find yourself in the company of about 300 travel & tourism professionals who had been gathered together by Razzmatazz 360 degrees and Omeir Travel Agency for a one-of-its-kind travel trade event.  Under the name of Razzmatazz 360 degrees, this event aimed at rallying professionals from travel agencies, airlines, hotels, tourism boards, tour operators, car hire companies, theme parks and cruise companies etc… so that they could network and socialise with each other.

The Seychelles Tourism Board was one of the Gold Sponsors for the event along with Etihad Airways, Amadeus, Air Seychelles, Ritz Carlton and Amazing Thailand. In its role as a Gold Sponsor, the Seychelles Tourism Board had to provide entertainment which came in the guise of a group of dancers and musicians from the College of Arts, Seychelles.   Making up the group were Davis Paul Barbé, Jose Cyril Thelermont, Denis Rose, Lester Augustin, Nellianne Dookley and Camillia Jean Louis.

But we are jumping ahead a bit here.  Let us go back a few steps to the start of the evening, where people mingled and caught up with each other, before being welcomed officially by Conrad Caeiro, the event coordinator/planner.  The sponsors were all congratulated and presented with an award before the Seychelles became the centre of attention with its group of performers.  The audience was awe-struck by the fluidity of the movements of the dancers who seemed to be at one with the music.  An array of traditional songs kept both the dancers and the audience swaying their hips before settling down to some tamer performances by Ayala dancers followed by singers Simply Irresistible Darryl and Zarine.  The atmosphere then flared up again with the fiery flamenco dancers who created an appetite for the delicious international buffet dinner which was served straight after.  DJ Rudy kept the audience dancing till the early morning hours with the latest hits.

Replete and satisfied, everyone agreed that the event was hugely successful, not only in terms of the number of people in attendance, but also because of the quality of performers which showcased different countries’ cultures.  “It is very important to have this type of event”, said Ms. Esther, Tourism Attaché, of the Seychelles Tourism Board Office at the Embassy of the Republic of Seychelles in Abu Dhabi, “as tourism and culture should go hand-in-hand.  When tourists travel to other countries, they want to experience a bit of culture and Razzmatazz 360 degrees managed to merge both.  We look forward to participating again next year” commented Ms. Esther.

“UAE is today on the third spot of visitor arrivals to the Seychelles with 8,669 visitors and this is partly due to all the professionals who were present at the Razzmatazz 360 degrees event.  We have to continue to promote and market the destination through various platforms to reach out to potential visitors”, Ms. Esther concluded. 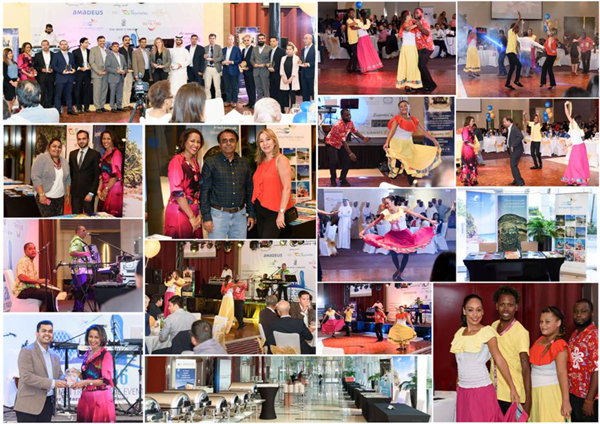