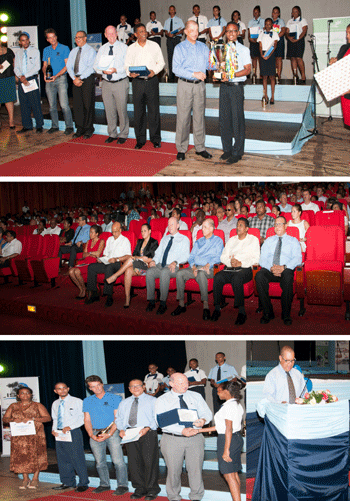 The Seychelles Tourism Academy have awarded students who have completed their studies there and who have excelled in their respective fields.

This was during the academy’s graduation ceremony held yesterday at the International Conference Centre in Victoria.

President James Michel and Vice-President Danny Faure graced the event with their presence along with the Minister for Tourism and Culture Alain St.Ange, Minister for Labour and Human Resource Development Idith Alexander, leader of the opposition in the National Assembly David Pierre, chief executive of the Seychelles Tourism Board Sherin Naiken and officials from the Shannon College of Ireland.

Also present were lecturers, staff and partners of the academy, parents and sponsors.

Speaking at the ceremony, the academy’s principal Flavien Joubert said the country needs talented and professional individuals to deliver good service in the tourism industry.

He urged the graduates to face challenges that they will encounter in the world of work, with pride, positivity and enthusiasm.

“A career in the tourism sector is borderless. Seychelles offers you the best, so take this chance to shine,” he said.

Success only comes to those who do not give up, he added.

Mr Joubert echoed words of thanks to the government, Minister St.Ange, principal secretary for tourism Anne Lafortune, Miss Sherin Naiken and the Seychelles Tourism Board team for their support towards the academy.

During the ceremony Shaquille Denis clinched the President’s Cup along with many other prizes. Shaquille was following the advanced certificate course in tourism and tour guiding.

For the first this year, a new prize was awarded to the most outstanding student in industry placement. The Minister’s Award went to Annelie Larame who was following the reception operations and services course at certificate level.

Stasia Lafortune won the Seychelles National Youth Council Award, as the student who has shown positive behavioural changes. She was also following the reception operations and services course at certificate level.

Best overall awards were presented to students at both advanced certificate and certificate levels in six different fields of study.

Sarah Vandagne won the overall best award in the reception operations and services while at certificate level Nicole Asba clinched the prize.

In the accommodation operations and services at certificate level, Zerrah Boniface won the award as the best overall student.

During the ceremony, President Michel and Vice-President Faure were presented with a token of appreciation from the students of the academy.