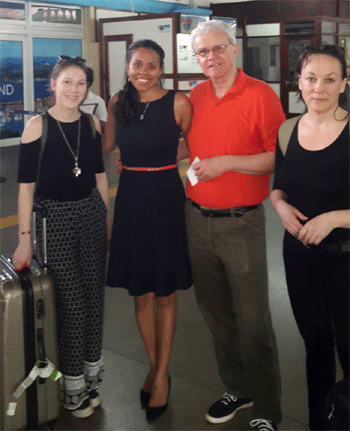 Sherin Naiken, the CEO of the Seychelles Tourism Board was personally at the Seychelles International Airport on Monday afternoon to welcome SAMI Tribe performer from Sweden Katarina Barruk arrived in Seychelles.

She was being accompanied by Lennard Swenson, the Seychelles Consul in Sweden.

This carnival in the Seychelles, now in its 5th edition, has been credited to rank among the top five carnivals of the world. It remains the only carnival that manages to attract al the best and most known carnivals to parade together followed by cultural troupes from the Community of Nations. Sweden will be part of the 29 countries showcasing they culture through this 2015 edition of the unique carnival in Seychelles. This carnival that has been nicknamed the carnival of carnivals by the International Media is staged annually under the theme of the ‘Melting pot of Cultures’.

Katarina Barruk is a young Ume Saami artist who will be flying the Swedish and SAMI flag at this year’s event. She comes from the small town of Storuman in the north of Sweden, where she was raised as one of a very few people in the entire world who can speak the Ume Saami language fluently.

Katarina, who has dedicated a large part of her life to create music in Ume Saami, is a recent graduate from the Arts Program at Midgård upper secondary school in Umeå, and she is currently working on her debut album together with the internationally-acclaimed South Saami musician and producer, Frode Fjellheim.

Having been named the Young Artist of the Year at the International Indigenous Festival Riddu Riđđu back in 2012, and having performed extensively throughout the European Capital of Culture year in Umeå back in 2014, Katarina has used her well-deserved fame to become an outspoken advocate for the Ume Saami language, which together with her love for music constitutes her two biggest passions in life.

2015-04-21
Georges
Previous: Mauritius is ready to party in the coming Seychelles Carnaval International de Victoria 2015 as delegation arrives in Seychelles
Next: Island Resorts and 5-Star Resorts of the Seychelles meet island’s Tourism Minister in the presence of Tourism & Hospitality Association Chairman