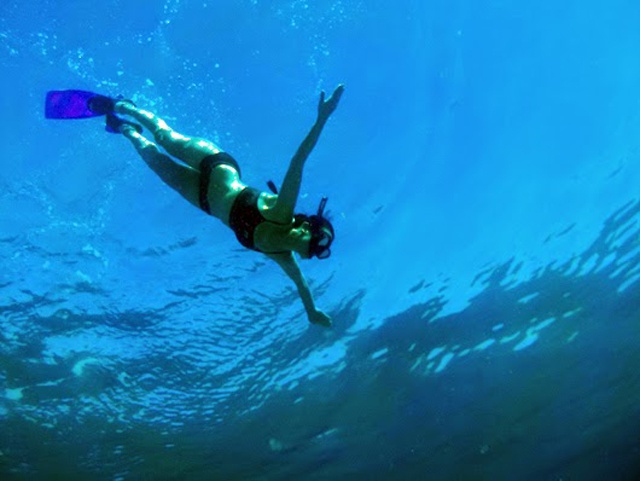 Into the deep: Hungarian conservation volunteer Zsuzsi Ilycsin explores the wonders of the marine reserve beneath the waters surrounding Cousin Island in the Seychelles archipelago. (Laszlo and Zsuzsi Ilycsin) Photo license Purchase photo

(Seychelles News Agency) – When on the island of Cousin in the Indian Ocean archipelago, the nature photographer does not have to wait for long to get a perfect shot, particularly at dawn or dusk when the island is teeming with activity.

In fact, some might say they were spoiled for choice: here a flock of fairy terns on their daily fishing expeditions, there a brown lesser noddy feeding regurgitated food to its newly-born chicks.

Suddenly, a fight erupts between two female white-tailed tropicbirds for the best nooks and crannies in which to lay their eggs, while a runaway crab scuttles off with a helpless baby turtle in its claws.

A close encounter with a giant bronze-eyed gecko would be a commonplace occurrence on the Cousin Island Special Reserve, which is thronged with harmless and inquisitive lizards and geckos of every kind, as well as over 300, 000 seabirds from seven different species.

It is usually in the early hours of the day that Laszlo and Zsuzsi Ilycsin clinch the very best photographs of the island, situated to the west of the archipelago’s second most populated island of Praslin, just a 15-minute boat ride away.

The Hungarian couple arrived on their castaway island at the beginning of March for a two-month volunteer programme.

“Our day starts with beach patrols. In turtle season, we do three or four times patrol along the coast of the island [over one kilometre long], if we find a nest, sometimes, we have to do nest excavations, demarcations and monitoring of babies,” said 28-year-old Zsuzsi, in an e-mail interview with SNA.

“Our patrol also entails collection of rubbish and debris on the beaches in preparation for the arrival of visitors. We also need to rake the paths and trails before their arrivals,” she said, adding that boat landings can only be made via the nature reserve’s boats each weekday morning.

Depending on the size of the boat and the number of visitors on board, these transfers, which are facilitated by rangers and volunteers often take several hours. On other days, morning patrols are followed by the monitoring of seabird colonies, with special attention paid to a recently-introduced population of endemic and highly endangered magpie robins.

Since 1968, Cousin Island, which covers an area of 27 hectares of land, has been turned from a coconut plantation into a nature reserve through various habitat restoration programmes. Now managed by Nature Seychelles, a non-governmental organisation and a partner of the world’s largest nature conservation partnership, BirdLife International, the island has been designated an important bird area (IBA), having successfully introduced and established the population of five endemic land birds of the Seychelles, including the Seychelles warbler (Acrocephalus sechellensis).

Laszlo and Zsuzsi are part of a group containing four other volunteers, all of whom hail from different parts of the world. The programme is available all year round and volunteers can work for up to ten weeks on the island. Their assistance allows the reserve to continue with its different conservation programmes, helping expert scientists and rangers with their duties while also dealing with the regular influx of eco-tourists to the island.

As they go about with their daily tasks, the couple also takes time to take a few selfies and poses, which are later posted on their blog, so that a few hours later, thousands of kilometres away on the other side of the continent, their friends and over one thousand followers in Hungary can wake up to see the stunning photos of Laszlo and Zsuzsi’s daily adventures.

“Most of our followers are very interested in our photos; of course, because this is a very unique destination and we are trying to introduce more sides of Seychelles than what you can see as a tourist, for example turtle hatchlings, endemic birds, and underwater photos. In the middle of Europe you cannot see anything like this,” said Zsuzsi, adding that their adventures have also received media attention back home, with several articles published.

Hailing from the capital Budapest, the pair was first introduced to Cousin Island on a day trip in 2012 when they first came to Seychelles on their honeymoon.

“We were here for three weeks, [staying on Praslin] and visited Cousin Island as well as La Digue, Curieuse, St Pierre and also the main island Mahe. We fell in love with Seychelles at that time, so our main goal was to come back here to spend more time and live a little bit longer. We are very passionate about wildlife and conservation, both of us work with animals at home, so we also wanted to get more experience doing practical things,” says Zsuzsi.

To prepare for their two months in Seychelles, Zsuzsi, who has a degree in communications and Laszlo, 31, who works in the Budapest Zoo and Botanical Garden, took a professional course in photography. They said they had also prepared themselves mentally for living on an isolated island with less than ten inhabitants, in a humble abode, without the luxury of a flushing toilet or television and the initial boredom that comes with the sudden change in lifestyle.

“The duties allow us to stay focus on our tasks so we don’t get so bored. We have also lots of reading materials and the blog is our way of coping with everything…” said Zsuzsi, adding that they also have a great Facebook page which they regularly update with photos and news about their life on Cousin Island.

“We love showing off to the outside world what most people will never see,” she added.

They are also learning about the Seychelles culture from other local rangers on the island and a rare trip to Praslin allowed them to connect with more Seychellois and indulge in uncovering hidden treasures at the local market.

“In the beginning, we struggled to manage, it takes a little bit of time to get use to this way of life. It is just another way of life, closer to nature and animals although leaving all the modern things behind can be hard.”

As it specialises in marketing the Indian Ocean archipelago in Budapest, Lagun Travel’s owner immediately recognised the blog as an excellent opportunity to show tourists in Central Europe that there is more to Seychelles than sun, sea and sand.

Although mobile phones do work on Cousin, without a dependable internet connection the Ilycin’s project to showcase their adventures on Cousin would have been impossible. This is why they lobbied the help of Lagun Travel, a travel agency based in the Seychelles capital of Victoria, who agreed to sponsor them till the end of their stay in Seychelles.

“We are a market leader in Hungary and most of the Hungarians travelling to Seychelles (35 percent) come directly to us, although we also target Slovakians and other destinations,” stated Szilvia Baro, the sales manager and owner of the travelling agency in an e-mail to SNA. “When we started the business in 2009, the market on that side of the world was very slow so we started to collaborate with other DMC’s [Destination Management Companies] from Seychelles.”

According to Baro, in 2009, there were over one hundred Hungarians travelling to the Seychelles but this number has now tripled to more than one thousand per year.

2015-04-04
Georges
Previous: Seychelles Christians observe Good Friday with Stations of the Cross march
Next: Sweden confirms it will showcase its SAMI Culture at the April 24 Carnival in Seychelles