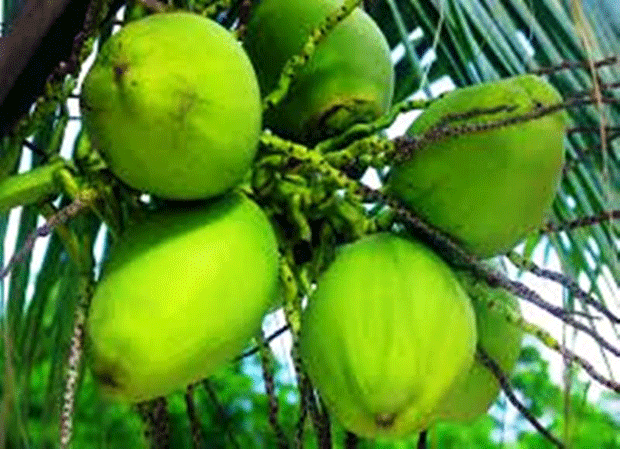 Once upon a time, our coconuts were an important source of revenue for our country.  To mark Africa Traditional Medicine day on August 31, TONY MATHIOT, on behalf of the National Heritage Research Section shares some knowledge about the healing powers of our coconut…

“A hundred years ago, millions of coconuts were collected annually in our country”.

The old man’s nostalgic commentary shatters my pensive mood, rapt in watching the shimmering explosion of the waves on the craggy granite rocks and the rampage of swirling waters below.

“To supply the confectioneries and the pharmaceuticals of Europe with oil,”  I reply, being eminently conversant with the colonial statistics pertaining to Seychelles’ agricultural economy. 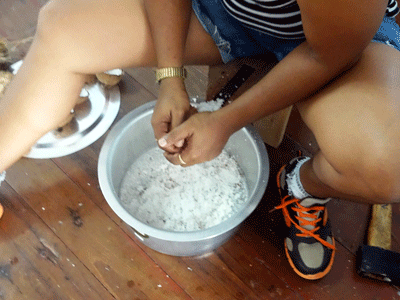 “We exported to Asia and Africa, as well,” he reminds me.  He is cleaning midribs of coconut fronds with a penknife to make brooms.  Instead of carrying so many loads of coconut fronds back to his place which would be at least a ten minutes’ walk through the cinnamon forest, old man Polixene finds it much more practical to clean the fronds on the spot and then carry the bundles of mid-ribs (zig) to his dwelling to make the brooms.

We are on the coast of Anse Marie Louise, the southern part of Mahé, on a large granite elevation overlooking the sea.  At this time in August, the wrath of the south east monsoon is at its seasonal peak, but today there is only the occasional gust that adds a pleasing salty coolness to the sweltering heat of mid August.

Old Polixene has gathered enough coconut fronds to make at least seven or eight brooms, which he will sell to folks at Anse Forbans.  His knife moves dexterously across each frond, removing the long strip of leaf from the mid-rib in one swift movement. 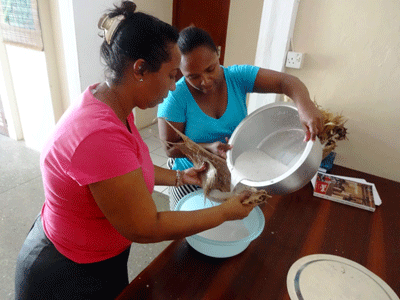 “The coconut tree is the tree of life,” he says.

“It has provided us with a variety of things, since a long time ago”,  Old Polixene tells me, “roofs for houses, food from the nuts, baskets, ropes, water … toddy.  A lot, you know.”
Yes I know.  Slaves also must have found salvation in coconuts which supplemented their daily rations.  That is, at the risk of being punished, since once upon a time, coconuts were the most precious things for plantation owners.  On the coast where we are, coconut palms have ceded place to casuarinas trees.  But, further inland, they have spread into the hills of Capucin and Cap Malheureux.  These coconut trees are the progenies of the ones that the first settlers found when they arrived on our shores over two centuries ago.  Papa Polixene are among the scores of men and women who earned their livelihood on the coconut plantations of Anse Marie Louise and Capucin during the time that there was a settlement there – from the early 19th century to the mid – 20th century. 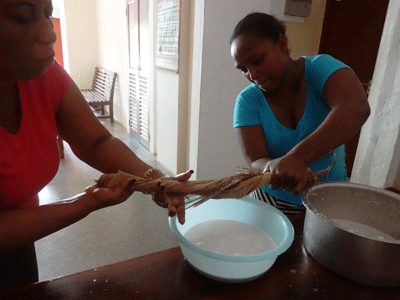 I am constantly fascinated by the old man’s peasant knowledge and wisdom.  Today, I’m curious to know about the medicinal virtues of our common coco snucifera.

“There are plenty, son,” he tells me assuringly.

Plenty?  I know that coconut oil holds a respected and valuable place in our local folk medicine.  I’ve heard of its applications in oriental therapies and I know that advocates of naturopathy have the same reverence for coconut oil as they have for aloe vera.  In modern medicine, coconut oil is used to form absorbable ointment bases for scalp applications in the treatment of dandruff and psoriasis.  The pharmaceutical industry uses coconut oil in a stupendous variety of emollient skin applications and suntan lotions.  Do you remember Coco Moreno back in the 70s?
“My grandma used a blend of coconut oil and camphor to treat rheumatic pains and sprain”,  old Pa Polixene is eager to enlighten me ‘‘you heat the coconut oil in a tin mug over a candle.  Then you drop a piece of camphor which melts in the warm oil.  It is an effective application for headache as well”. 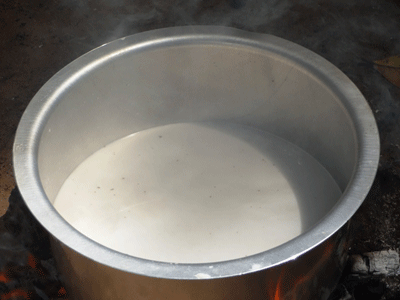 “I heard that coconut oil blended with cinnamon oil or mentholatum was used in the treatment of certain ailments”.

“Yes, this is very effective for fever.  You rub the oil all over your face, your temples and all over your back.  It is very relieving.  It makes you sweat out the illness.  After a while you start feeling better …”

But in spite of that, are we not convinced that the ultimate febrifuge remedy is Aspirin or Lemsip?!

“I’m telling you, besides various medicinal plants, our coconut can provide remedial treatment for many ailments.  As good as the doctor’s pills”.

I certainly don’t doubt that.  Absolutely.

For almost an hour, on this windy August Saturday morning, I learn of the somewhat little-known medicament aspects of our versatile vanishing coconut. 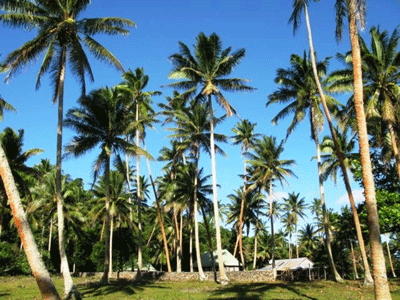 There is even a powdery matter ‘like saw dust’ to be found underneath the leaf-base.  If you get a bruise or a cut that is bleeding profusely, you scrape some of this powder and you place it all over the wound.  It has a haemostatic effect!  “It’s like a miracle,son.  Try it”.

For skin fungal infections – before you buy that tube of clotrimazole and risk any allergic reactions (which could require yet another visit to the chemist for another kind of lotion or ointment!) try rubbing the small immature tender nuts over the affected areas.  Apparently, the very juice that can permanently stain your clothes also cures fungal infections like tinea corporis (ring worm).  Coconut oil has an emollient effect on skin disorders like eczema and scalp psoriasis.

Orally, coconut oil is an excellent laxative.  It improves digestion and bowel function.  Ideal for constipation if you don’t have milk of magnesia.  Some folks have their daily coconut oil ‘fix’ because it helps protect against kidney disease and bladder infections.  It kills bacteria that cause ulcers, throat infections and gum disease, and improves your cholesterol ratio, reducing risk of heart disease.  As an emetic agent, coconut oil has played a pivotal role in life-saving situations.

“I remember once,” old Pa Polixene recalls with vivid clarity “one evening at Bougainville.  A young lad was suffering from indigestion and severe abdominal discomfort after eating almost an entire jackfruit.  He almost couldn’t breathe, as if he was choking.  Luckily, his grandmother knew it.  She made him swallow a spoonful of coconut oil with salt.  A couple of minutes after, he vomited everything out.  He was greatly relieved”.

The water obtained from the green nuts is a good tonic drink.  If you’re suffering from sunstroke, try pouring a glassful of that water over your head.  Just a glassful will also relieve that occasional bout of nausea or stomach upset.  No need for Eno.

Our grandparents also used to make warm poultice with grated coconut to heal muscular pains.  And in those days there was no medicament like Gaviscon to relieve heartburn.  People suffered from heartburn like they do nowadays.  You only had to chew grated coconut and swallow the milk, and you would feel much better.

So I’ve heard.  And yet coconut does not contain magnesium trisilicate orarginic acid-ingredients that heartburn medicine invariably contains.  Well, I suppose that is the marvel of naturopathy.  You consume the essence of the ‘thing’ itself.  You don’t have to absorb twenty or so chemical ingredients.  Coconut oil is an excellent moisturiser and admittedly so is Vaseline cocoa glow.  But if you prefer the latter, your body will have to absorb other accompanying chemical additions like titanium dioxide and dihydroxy propltrimonium chloride.  All, for the sake of moisturising your skin – when pure ‘virgin’ coconut oil could do!

So many decades ago, coconut oil was used for cooking.  It was more easily available, and it was cheaper.  Those were the days of coprah and ‘poonak’ (the residue of the dried coconut after all had been extracted). I’m talking about the 19th century until the early 1960s.  The value of coconuts was such that you could find yourself facing the magistrate if you could not account for a couple of coconuts found in your possession.  One can read in the Seychelles Clarion of Saturday 3rd July 1937, that a woman ‘fut poursuivie pour avoir dérobé 2 coco secs our prejudice d’un nommé … au Pointe au Sel.  Elle plaida coupable et fut mise à une amende de RS10 et les frais’.

Well, our ancestors relied on the remedial virtues of coconut oil when they felt those aches and pains, even if Sloan’s Liniment was available.  Perhaps, they were sceptical of medicaments that come in jars.  They put a premium on health, mind you.  They used to drink daily infusion of some sort without suffering from any infirmities of health because they were advocates of ‘prevention is better than cure’.  No wonder we have so many octogenarians in our country!

Old Pa Polixene ties up the bundle of mid-ribs with ‘pandanus’ rope.  He lifts it up over his shoulder with an amazing ease.  He’s eighty-three.  The flagging muscles in his arms and his broad shoulders that now sag attests to the stoutness of his youth.  He is barefoot, shirtless.  He adjusts the faded blue cap on his head.
“Let’s go, son,” he mutters.

Today, we have at our disposal, an overwhelming array of prescription and over-the-counter medicines.  Some are highly efficacious and some have no curative effect.  The pharmaceutical industry is a multi-billion dollar venture.  Such is its monopoly on our health that we are made to believe that there is a pill, a drug or an ointment for every ailment.  But … is there?
Our beloved coconut may not be an elixir for all our ailments, but it can certainly bring blessed relief to more than a few of our common ills.  Like old Pa Polixene says “Try it”.