Breaking News
Home - news - The man behind the Seychelles flag

The man behind the Seychelles flag 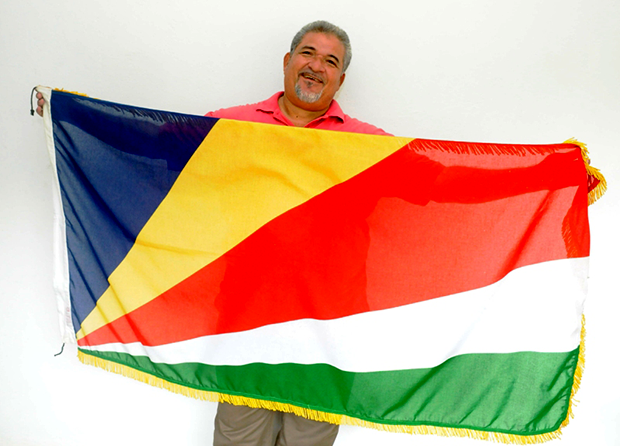 Twenty-three years after handing the people of Seychelles one of their greatest gifts, creative artist Philip Uzice who designed the flag of the country’s Third Republic has mixed feelings about how everything went on around him from the day it was first hoisted.

Aged 28 when he designed the flag in 1996, Mr Uzice said he feels proud to have given Seychelles and its people their identity, while he is not happy about how he had been treated after.

He explained that as the person who designed one the country’s national symbols, he should have been treated with more respect and shown more appreciation for his work which he said will remain in the history book.

Being very specific about his thoughts, Mr Uzice explained that he is not referring to financial, or materials gains.

“All I wanted was some sort of recognition for my work,” he noted.

He said as the one who designed the flag, he should be, at least, guest at the national activities involving it, such as the Independence Day parade, or the flag raising ceremony to commemorate Constitution Day.

Commenting on the publicity and privileges winners of the Miss Seychelles beauty pageant get, Mr Uzice said it is really unfair.

“I have created something that will last for a long time and has already been carved into the country’s history and I do not get any recognition, compared to someone who just walked around for an hour or so in some fancy clothes,” he added.

Mr Uzice further added that a great percentage of the population does not even know, let alone has not heard the name of the man who designed the country’s flag.

He however gets great satisfaction whenever the flag brings people together as one nation.

He gave examples of sporting events, precisely the Indian Ocean Island Games where the whole nation comes together as whole, waving the Seychelles flag to support our athletes.

Another example Mr Uzice gave was how all political parties incorporate the flag in their logos.

This, he said, is a sign that despite our different views and opinions, there is something which bonds us together as a nation – the flag I designed.

“Most of the department and company logos nowadays bear the colours of the flag,” added Mr Uzice.

Commenting on the different colours of the flag, Mr Uzice said blue represents the sky and the sea, yellow the sun giving light and life, red represents progress, white is for peace and harmony and lastly green is for the land and natural environment.

Mr Uzice submitted half a dozen designs after researching into the history of Seychelles.

“I inspected the flags of several other countries and I wanted ours to stand out among those of other nations,” Mr Uzice told Seychelles NATION in 1996 before the flag was hoisted for the first time.

He also said he sees his beloved Seychelles as a tiny dot on the globe but with the determination, as powerful and beautiful as the rays of the sun, to penetrate the world.