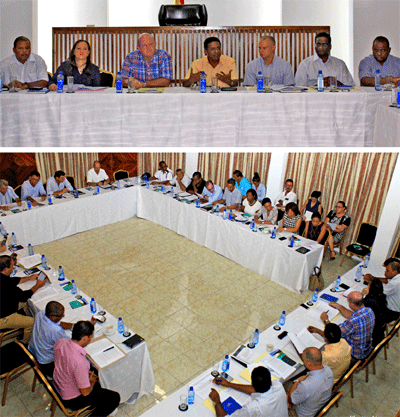 Last year the Ministry of Tourism and Culture and its Tourism Board called on other Government Ministries and Departments to join them for a series of meetings with representatives of the private sector represented by the Hospitality & Tourism Association (SHTA) and the Chamber of Commerce & Industry (SCCI). These meetings held on a regular basis proved a success as both the public and private sector were able to look at the islands tourism industry with the one eye in what were a series of frank and open discussions.

Last Friday the 29th January the first meeting of the island’s tourism public and private sector trade again took place under the Chairmanship of Vice President Danny Faure in was was called the first multi sectoral meeting this year.

The meeting chaired by Vice President Danny Faure was held at the National House in Victoria and was attended by the Minister for Tourism and Culture Alain St.Ange, Minister for Finance, Trade and the Blue Economy Jean-Paul Adam, Minister for Labour and Human Resource Development Idith Alexander, Minister for Home Affairs Charles Bastienne, and the Minister for Environment, Climate Change and Energy Didier Dogley and the Minister for Investment, Entrepreneurship Development and Business Innovation Michael Benstrong.
On the private sector side present were the representatives of the Seychelles Hospitality and Tourism Association (SHTA) led by Eddie D’Offay, the Vice Chairperson of the Association and the Seychelles Chamber of Commerce and Industry (SCCI) led by Marco Francis the Chairman of the Chamber. Also present were other key officials from the government.
World Bank consultants were also present and gave an overview of the value chain analysis for the tourism industry which is being carried out.
Members of the Seychelles Chamber of Commerce and Industry and the Seychelles Hospitality and Tourism Association used that opportunity to give their views on what was presented by the World Bank consultants and both groups said that this was a good exercise being undertaken by Seychelles.

Discussions during this meeting centred on Air Seychelles, the China-India tourism strategy, air transport policy, inter-island travel transportation, taxi meters, illegal charter boats in marine parks, development on Curieuse island, signs on beaches and several environmental issues.
In regards to the air transport policy, members of the private sector have requested for further meetings with the concerned authorities to discuss the matter before it is presented to the cabinet of ministers.
Speaking about taxi meters, the principal secretary for transport Patrick Andre said installation of these meters have started and taxi drivers have already followed training. He added that taxi drivers will start using these meters in two months’ time.
Speaking to members of the local press after the meeting, Minister St.Ange said this first meeting was needed to touch base on what has been achieved so far in regards to the challenges aired during the previous meetings to alleviate the constraints of the tourism industry.
Minister Alain St.Ange added that it was also a chance to review key points raised by the trade which had not had closure on until now.
“Today was also a chance to bring in a new point on board and that is the value chain analysis. The World Bank consultants are in the country to ensure that we relook at the vitality of our tourism industry as it touches all sectors of the country,” Minister St.Ange said.
“The analysis will also help us to look at the yield connotation so that Seychelles benefits to the maximum out of its tourism industry.”
Minister St.Ange added that the trade has pointed out that as everything in Seychelles revolves around tourism, we need to ensure get it right at all times. In ending his press interview Minister Alain St.Ange said:- “We need to keep working together as we have only one tourism industry for Seychelles, and our country needs to come out as the winner. I have said this often, we do not have one tourism industry for the private sector and another one for the government. We have but one tourism industry andto ,is for Seychelles” the Minister said.